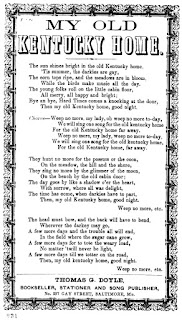 “It was a fantastic way to market Kentucky, which at the time had this reputation of being violent and corrupt and poor and a mess.”

The more things change, the more they stay exactly the same ... look, I'm always reluctant to trouble the revelers with facts, but here goes.

Everyone sings 'My Old Kentucky Home' at the Derby. Few know its controversial story, by Tom Eblen (Lexington Herald Leader)

On the first Saturday in May, as the Kentucky Derby is about to begin, 150,000 people at Churchill Downs and a worldwide TV audience pause to sing or at least mumble along as a band plays the sentimental strains of “My Old Kentucky Home.”

The words of the song’s first verse — the only one sung then — speak of the beauty of Kentucky, a longing for home and hard times “a knockin’ at the door.” But what is the song really about? Who is this lady, and why is she weeping?

Before anyone can think too deeply about it, the horses are at the starting gate, the two-minute race is over and it’s time for another mint julep.

Emily Bingham grew up in Louisville as the eldest daughter of The Courier-Journal’s publisher. But she never thought much about Kentucky’s state song until she moved back home after graduating from Harvard and earning a Ph.D. in history from the University of North Carolina.

Friends would visit for the Derby, and Bingham would field their questions about Kentucky history and tradition. She finally started researching “My Old Kentucky Home,” a song about place and race that for nearly 170 years has been loved, hated, rewritten and selectively used by both blacks and whites for very different reasons.

Bingham, the author of two acclaimed books, has spent several years researching a book tentatively titled “Sing One Song.” It will explore the complex feelings and endless controversies “My Old Kentucky Home” has evoked.

“You can look at the song as kind of a sonic monument; it still lingers in our ears,” Bingham said. “But it’s a very slippery subject, because part of the story is about race. A big part. I want to know who sang the song and what it meant to them.”

Stephen Collins Foster, an enigmatic songwriter from Pittsburgh, wrote “My Old Kentucky Home” in 1853 for Christy’s Minstrels, one of the nation’s most popular traveling blackface music and comedy troupes.

"The song was a hit, but it might not have remained in the public ear so much if it hadn't been picked up as a chief part of the soundtrack of ‘Uncle Tom's Cabin’,” Bingham said. "Everybody saw 'Uncle Tom's Cabin'" ...