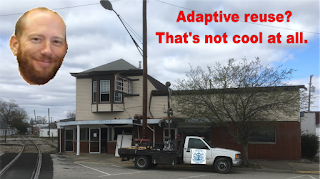 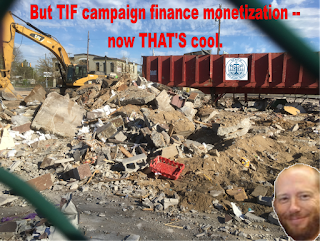 Last weekend we surveyed the most recent Redevelopment Commission meeting minutes in search of information about the festering municipal eyesore at the corner of Vincennes and Market.

Lancaster-themed "Micro Lofts" soon will inhabit Duggins' anchor wasteland at the corner of Market and Vincennes.

"Mr. Toole stated that this project will include Micro Lofts, which is a new concept seen in bigger cities, geared towards Millennials and Empty Nesters that want to be able to travel and go and come as they please. Mr. Toole stated that he believes that this concept is fresh to the market country wide but is a hit in the larger Metropolitan Statistical Areas."


The April 10 minutes didn't specify square footage for the micro lofts at Duggins Does Lancaster Lofts, but these units in Detroit are a useful comparison.

A Look Inside Of The Future 260 Square Foot Micro Lofts At The New 28Grand, by Shianne Nocerini (Daily Detroit)

The development may be large, but the units inside are not. We’re talking micro lofts.

You might be wondering what a micro loft is, and it sounds exactly like what it is. It’s a tiny apartment with a touch of a loft sensibility. Each unit will be roughly 260 square feet.

28Grand will be a 101,000 square foot building that will have 218 micro lofts and 13 floors. The units will feature nine foot ceilings and large picture windows that are 6 feet high and 10 feet long.


Or, we can begin the discussion at a whopping 400 square feet. Speaking personally, I think micro lofts are a good idea. Not everyone wants to own a McMansion or rent a conventional apartment.

As for the price of one of these micro lofts, there where Tommy Lancaster Restaurant and Market Boy once stood -- that's going to tell the tale, isn't it?

Would you live in a 400 square foot apartment?, by Rachel Quednau (Strong Towns)

Our friend Joe Minicozzi at the geoanalytics firm Urban3 gives presentations around the country sharing deeply valuable data on which development patterns benefit cities and which do not. In some of these presentations, he likes to share an example of a real estate developer who, back in 1994, chose to fix up an old hotel in downtown Asheville, North Carolina and convert it into small apartments with a store on the bottom floor.

Joe explains that there are three real ways to provide affordable housing: 1) Get an incredible real estate deal, 2) Get it subsidized by a government or nonprofit entity, or 3) Build smaller, no frills homes.

This downtown Asheville development went the latter route. The apartment units were 400 square feet each so they could be offered at a cheap monthly rent.

When Joe presents this project for audiences of elected officials, business people and city leaders around the country, there's typically a reaction along the lines of: Who would live in a 400 square foot apartment? How could they possibly rent these units?

It's at that point that he asks the audience: Okay, do any of you live in a 400 square foot apartment? Sometimes a few people raise their hands, but usually not more than one or two.

Next he asks: Alright, but who in this room has lived in a 400 square foot apartment? All of sudden, the conversation shifts. Lots of people are raising their hands. They're thinking of their college years, their post-graduate days, the period after their divorce, the time they lost their job and had to downsize quickly...

When you're talking to a room full of suits with six-figure household incomes, the idea of a 400 square foot apartment seems ludicrous. They can't imagine anyone living in it and therefore, they don't create the circumstances for it to be built. The local building codes won't readily allow such a small unit, but the city staff and elected leaders don't think twice about it because they can't conceive of a 400 square foot lifestyle. Meanwhile, the bankers don't make financing available for a project like that because, of course, none of them live in 400 square foot apartments, and for the developers, it's the same story. That's why in Asheville, a city of 90,000 people, there were hardly any small apartments available downtown at the time that this building was redeveloped (and there still aren't many today).

But when a room full of powerful people starts reflecting back on their lives, they recognize the specific prism through which they're viewing things. "Sometimes we go into decision making thinking about where we are in our lives," Joe explains. "We take our biases, and assume that needs to be the standard or the rule." This is a serious mistake, though ...

... those of us that are happily enjoying affordable small apartments need to make our voices heard and share with those in power that these units work, and that they provide very necessary housing at a reasonable price.

And if you're a banker, a developer, or a local government leader, stop viewing your city only through middle class and middle-aged eyes. Just because a particular form of housing looks utterly unappealing to you at this point in your life, it doesn't mean there aren't plenty of residents who wouldn't gladly live there if it meant an affordable monthly rent. We miss out on so many opportunities to provide housing for people because of this prevailing elitist mindset which says "No one would want to live there!" In fact, there are plenty of people who, when faced with a choice between spending most of their income on housing, or moving in with relatives, or even becoming homeless, would much prefer a small apartment over any of these options.