The revival of the black athletic struggle, and a collision with our post-9/11 world. 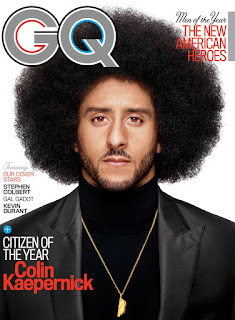 Just about everyone in New Albany believes Romeo Langford will be a professional basketball player following his tenure at Indiana University.

Just about everyone in New Albany will be closely monitoring Langford's evolution as a basketball prodigy.

My own little bit of voyeurism from afar will be observing his evolution as a black athlete.

‘There’s No Substitute for Confrontation’: An Interview with Howard Bryant on Today’s Political Black Athlete, by Dave Zirin (The Nation)

Bryant’s new book explores what happens when black athletic struggle is revived, but collides with our post-9/11 world.

Howard Bryant is the author of eight books including Juicing the Game: Drugs, Power, and the Fight for the Soul of Major League Baseball, and The Last Hero: A Life of Henry Aaron. He is also a columnist for ESPN The Magazine and was the editor of The Best American Sports Writing 2017. His latest, out next week, is called The Heritage: Black Athletes, a Divided America, and the Politics of Patriotism.

What is The Heritage? How do you define it?

It’s not a responsibility they’ve always wanted, but it’s one that was created in the mold of the Paul Robesons, the Jackie Robinsons, and then Muhammad Ali and Tommie Smith and John Carlos. I think it’s something that no matter how big your contract is, it’s a responsibility that will always stay with you, not because of your successes, but because of how far African Americans have had to go to gain equality.

There is no greater influence in American culture today than 9/11. 9/11 is Pearl Harbor. 9/11 is Watergate. When you look at sports, or going to the movies, or walking through the airport, the specter of 9/11 touches everything. And what 9/11 did to sports was transform it from a place where being apolitical was part of the business model, to making politics part of the business model.

And those politics are extremely, extremely powerful. They are militarized. They are racialized. They are internalized in terms of heroes and villains and it set up a confrontation because you have this hero-worship of police at the time when police brutality is an everyday occurrence and fear in the black community and many of the athletes are from these communities. You’re asking African Americans to deify and to genuflect toward the very entities that have really caused a lot of harm in the black community ...