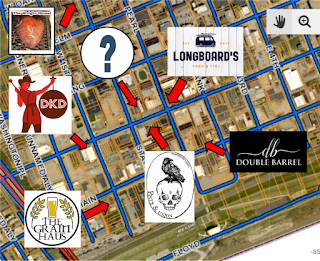 Today an orange ATC sign appeared on the front door of the former Comfy Cow (109 E. Market), meaning soon the building will enjoy a different life as a bar (I'm pulling for designer frozen Brandy Alexanders). The ATC hearing is on July 3, so the opening will be some time after that.

In back-dated news: Just recently, Floyd County Brewing Company expanded with a new seating area situated just down the hill from the main building. The Grain Haus is separated from the original structure by the Biergarten, and it's up and rolling.


There have been reports of Eh Cumpari mobile pizza sightings, and so my assumption is that food from the FCBC kitchen is not being served at The Grain Haus. Corrections are greatly appreciated (Sunday afternoon update: Brian Hampton explains all):

Currently, The Grain Haus offers a limited bar bites menu from Floyd County Brewing, food trucks such as on Sundays and anyone can bring in food from local restaurants as well.


It's been known for a while that Dragon King's Daughter is moving from the corner of Elm and Bank to 129 W. Market. The time appears to be nearing.


Following are the bar and restaurant "coming soons," either with ATC license hearings completed (Longboard's) or applications on the docket June 5 (Double Barrel and Pints&union).

Longboard's Taco & Tiki
"Born of a passion for endless summers, delicious food, and exotic drinks, Longboard's (302 Pearl Street Suite C) is our love letter to coastal taco and tiki shacks around the world."

There's a new barbecue purveyor at 822 State Street: The Wright House Bar B Q, where Shawn's used to be.

Thank you New Albany for making me cook more pulled pork! Staying longer just to make sure I don't run out!
I smoke for the people!- The Boss
Wow a sold out day!

Got to smoke more!
Make us work New Albany!


Finally, no solid news yet on the Main Street space adjacent to The Exchange, formerly occupied by Feast BBQ.
Posted by The New Albanian at 5/26/2018 07:32:00 PM