Our annual May Daze observance puts the workers back into Walpurgis. 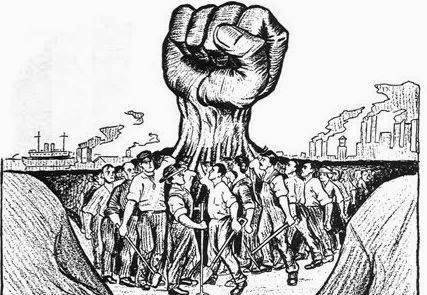 This essay is reprinted or linked yearly, attesting to my eagerness to remind you that on May Day, while the Louisville area eschews work and focuses its partying proclivities on the ponies, most of the rest of the world takes a holiday amid thoughts about the nature of work itself.

Thanks to the wonders of digitalization, there's now a stand-alone post for photos of the Vienna May Day celebration in 1987. 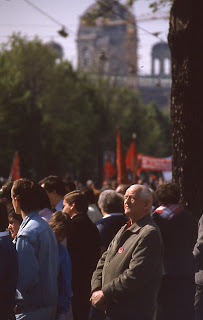 The year 2016 is a tough act to follow. It may have been the finest season ever for personal May Day celebrations.

For one thing, Bernie Sanders was running for president last year. As an independent senator and avowed socialist, the fact that Sanders even exists in the American political non-spectrum is as good an introduction as any to the "real" international workers' holiday.

As an added bonus, we weren't in America at all when May 1, 2016 rolled around. Rather, it was the occasion of our Spring Break in Estonia, and two big surprises during a day trip to Helsinki: Kim Andersen's presence and a delightful though short left-wing May Day parade. 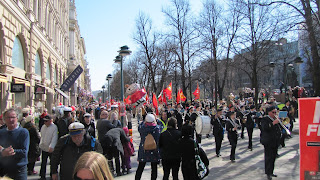 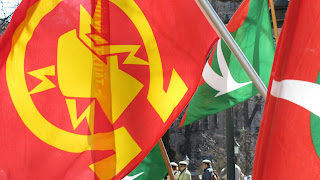 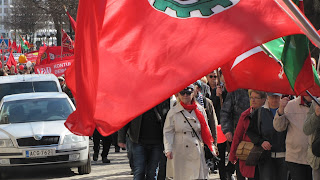 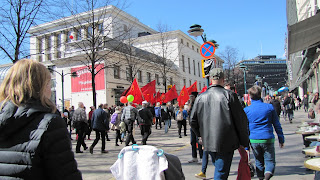 If Ainslie's Tavern comes into being by May 1, 2018, perhaps the tradition of May Day parades can be restored to eternally somnolent New Albany. One time around a city block would suffice to start. I'm sure Develop New Albany stands ready to get on board with this idea.

For many people May 1st is synonymous with Labour Day, but the date also signifies the onset of summer in the northern hemisphere.

ON THE AVENUES: May Daze.

By the summer of 1987, when I first visited the geopolitical conglomeration formerly known as the Soviet Union, the country’s annual May Day parade in Moscow had long since ceased to be a showcase of international socialism.

Rather, it had reverted to the overt, and was staged as an ideological pageant of nationalistic fervor – a genuine, old-fashioned, patriotic flag-waver for Mother Russia.

For the bedrock Soviet worker, who according to prevailing mythology was the chief beneficiary of international socialism, May Day’s single biggest selling point was being able to avoid the drudgery of the factory for a few precious hours. He’d have rather been on the beach at a posh Black Sea resort in Bulgaria, but what could be done?

At least for a while he could forget about the dystopian Five Year Plan by hopping the subway from his cookie-cutter, high-rise suburb to the historic center of the city, queuing with fellow vodka-bearers, plodding behind the massive missiles through cobblestoned Red Square, and then finally passing the reviewing stand arranged atop Lenin’s Mausoleum for a fleeting glimpse of the jowly old men in furry caps, grimacing arthritically as they waved vacantly into space.

The parade was a choreographed set piece, of course, one fraught with symbolic properties, both for natives seeking clues to the direction of their country apart from the stultifying daily propaganda, and for observers elsewhere, like professional Kremlinologists in the employ of Western intelligence agencies.

These consulting spooks subsequently would examine film of the May Day parade, reshuffle their tea leaves, and strain them through a few hoary apocryphal algorithms. Passwords would be repeated, reports submitted, meetings held, and murmured decisions reached. In appropriately clandestine fashion, money would be exchanged, and a hush briefly might descend, until suddenly, somewhere in the world, a legally elected government was overthrown – first one of the Capitalist paymasters’ choosing, then another selected by the Communists, each in its own turn, serving the dual purpose of preserving the status quo, and stimulating both full erections and full employment among participating secret agents.

Long before the decade of the 1980’s, the workers of the world – be they in Akron, Cape Town or Tashkent – already understood that they neither had united, nor shed their chains in any fashion sufficient to exercise control over the means of production.

The stewards of the world’s two great economic “-isms” had divided the planet into manageable spheres of influence, with the non-aligned throngs always ripe for recruitment and exploitation. At the end of a day’s toil, the best way for just plain folks to endure the enforced pieties of a May Day parade -- or a 4th of July picnic -- was to remain under the influence.

As Ernest Hemingway reminds us, the bottle is a blessed means of sovereign action. You first drink from it, and then throw it in the direction of the oppressor. In cases of rotgut, you can drink some of it, and then set the remainder aflame just prior to tossing (see “cocktails, Molotov”).

During the Cold War, Russians and Poles chose vodka. Cubans opted for rum. I always imagined the Czechs and Hungarians to be more fortunate than most, seeing as they possessed beer (Pilsner Urquell) and wine (Egri Bikaver) of a higher uniform quality than produced by Warsaw Pact neighbors.

For Americans, there’d be gallons of insipid ice cold light lager and a few pints of Jack Daniels. Choices from our NATO allies might have ranged from English cask bitter to ouzo in Greece, and from schnapps (Germany) to cider (Spain).

It goes to show that as opiates go, booze is vastly preferable to religion.

To recap, May Day takes place on May 1, and generally refers to springtime public holidays in the northern hemisphere, where the cultural tradition began long before Marx, Engels and Gus Hall.

For more than 125 years, May Day also has been considered International Workers' Day, which we Americans eventually chucked to another time on the calendar (Labor Day, at summer’s end) so as to avoid confusion with the Commies. Why? Labor and left-wing political movements first established May 1 as International Workers’ Day in memory of those who were killed and wounded during the Haymarket Massacre in 1886, which took place in Chicago.

In all my trips to Europe, only once did I find myself in position to physically attend a May Day parade. It was in Vienna, in 1987. I got up early and walked into the city center from my hostel across from Westbahnhof, finding a comfortable place to stand along the Ringstrasse near City Hall.

The various unions, workplaces and numbered districts each were represented, and at the end, after the sanctioned social elements had marched past, there were series of menacing, piggybacking trailers: Anarchists, Maoists, random radicals and even a mob of hooded Muslim extremists.

Ah yes, I remember it well. Afterwards, I splurged on schnitzel and local draft beer, reflecting on the way that America’s customarily oblivious exceptionalism has detached its labor holiday from the rest of the world’s.