The shrinking remnants of Moser Tannery can't take much more of this strange "love" from Team Gahan. 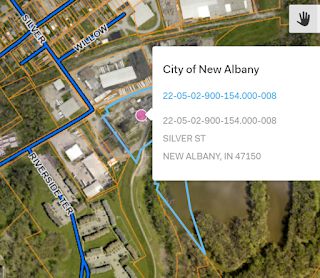 There was a fire over the weekend at, in or near the former Moser Tannery, which the city of New Albany purchased last year as part of its plan to render the Loop Island Wetlands into a proper, campaign-finance-accruing parks unit for the greater glory of Gahanism.

WDRB mentioned the fire, but did not follow-up. Don't even ask about the Collected Works of Tom May, formerly known as the 'Bune, which evidently was busy sponsoring a barbecue coloring book contest somewhere near River Ridge.

The fire was the second in the vicinity of the tannery since early March, when a late-model industrial warehouse adjacent to the remaining brick building went up in flames.

Is it just me, or has the abuse of the tannery site -- graffiti, vandalism, garbage and fires -- escalated noticeably since City Hall (ahem) took control?

I'm sure Dear Leader's official party line still calls for the reclamation of the main structure into something suitably luxurious to impel the mayor up from the bunker and out for a ribbon-cutting.

But right about now, it looks like the longer the city sits tight doing nothing at the Moser footprint, the greater chance there'll be nothing left to do anything with.
Posted by The New Albanian at 4/25/2018 08:06:00 AM

Yes, it's very sad for the city of New Albany to lose this historical complex, the only one of three that once thrived there in 1900. In that day when leather was an indispensable component of collars, harnesses, and other elements needed for carriages and farming (before autos and tractors), New Albany's tanneries not only fulfilled a great economic need, but also excelled in what they did. The Rochenbach Tannery was a general supply one, which is where most of the Mosers and Barths learned their trade. The Barth Tannery, which burned down in the 1950s, was a specialty tannery, taking the raw hides, finishing them, and creating many household leather products. (I have one of their leather clothes brushes.) Lastly, the Moser Tannery produced not only the raw hides for secondary businesses to fashion into shoes, coats, clothes, etc., but also more modern uses in a finished product, like gaskets for Detroit's automobile engines and upholstery. Also, in its later days in the 1980s, it sold a lot of hides to the Kentuckiana's leather crafters. So, in addition to maintaining the wildlife area on its 50 or so acres, it also provided its imprint on the wide circle of states, if not the whole nation, with NA being the center of this vital economic material's products.