Every day, too: "NFL Owners Sure Came Off Like Dumbasses When They Met With Players About Protests." 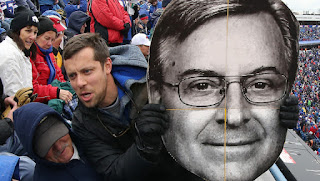 Terry Pegula, owner of the Buffalo Bills, might be interested to know that Charlton Heston retired from the National Rifle Association in 2003 and died in 2008.

One wonders if Pegula ever read a book.

NFL Owners Sure Came Off Like Dumbasses When They Met With Players About Protests, by Tom Ley (Deadspin)

... How do advanced age and generational wealth affect a person’s ability to have a meaningful discussion about a heavy subject? Not well, it seems. The Times reports that the meeting was full of school-room invocations of Wise Men Of History—Falcons owner Arthur Blank quoted Thomas Paine while Dolphins owner Stephen Ross brought up Martin Luther King, Jr.’s march on Selma—and failed metaphors. Bills owner Terry Pegula was in rare form.


Then the pinnacle of foot-shot references from Pegula, who made his fortune in fracking.

And then Pegula came back with whatever the hell this idea is:

Pegula offered that he thought the league was battling a perception and “media problem.” He said it would be great for the league to find a compelling spokesman — preferably a player — to promote all of the good things they were doing together. He suggested that the league could learn from the gun lobby in this regard.

“For years we’ve watched the National Rifle Association use Charlton Heston as a figurehead,” Pegula said. “We need a spokesman.”