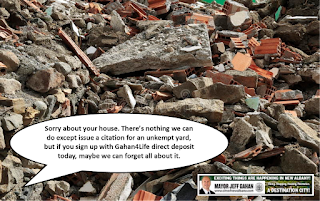 And instead of complaining, they should be grateful to live amid the unprecedented opulence of New Gahania.

Sewer project shakes Chartres Street, but is it damaging homes?, by Danielle Grady (The Collected Works of Tom May)

NEW ALBANY — A couple of New Albany residents say that a city sewer project is damaging their homes, but the contractor says that unrelated forces are causing the issues.

Tony Nava lives on Chartres Street, which is intersected by a city sewer project that involves boring 20 to 25 feet into the ground to install a new system. The work, which started in January, has been sending vibrations throughout the neighborhood, including to Paula Bader’s house.

The bricks of Nava’s chimney have loosened and cracks have formed in his ceiling and walls.

“The thing was, it wasn’t like that before construction,” said Nava at Tuesday’s New Albany Board of Public Works & Safety meeting.

SHANE'S EXCELLENT NEW WORDS: Bring out your brooms -- we have nothing to lose except the toxic cliques and vacuous kakistocrats of imbecilic Gahanism.
Posted by The New Albanian at 4/18/2018 08:12:00 AM

Email ThisBlogThis!Share to TwitterShare to FacebookShare to Pinterest
Labels: Ask the Bored, Board of Public Works and Safety, Chartres Street, damage, sewers, states of denial