According to this study, distracted DRIVING is 100 times worse than previously thought, but pedestrians are easier to blame. 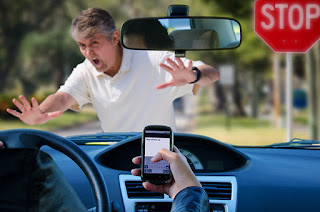 I won't say "distracted walking" doesn't happen, because I've seen it and done it a few times myself. The point to remember is that someone like me, walking "distracted," carries poundage in the hundreds rather than the thousands.

Drivers are elevated for coddling in many and varied ways, but the point stays the same: they're capable of wreaking far greater havoc, their responsibility is greater, and the law enforcement apparatus should prosecute accordingly.

The state of Indiana hired a consultant to determine why pedestrian deaths have risen, and the result is mostly car-centric bilge and claptrap, but at least one good point emerges.

Retting says the combination of a good economy and lower gas prices mean more drivers on the road: going to work, traveling on vacations and visiting restaurants—and bars.

“At a minimum, half of pedestrian fatalities are alcohol related,” Retting says. “And that doesn’t begin to take into account drivers and pedestrians that are impaired by alcohol, just not at that high of level.”


As an aside, "more drivers on the road" also helps to explain why the added traffic lane never actually reduces congestion. It's called induced demand, and you can look it up during cigarette breaks while you lobby for 10-lane highways to get you to work, when just leaving a few minutes earlier costs taxpayers so very much less.

Getting back to the heart of the matter:

100 times worse than we thought: Insights from a Zendrive’s 2018 Distracted Driving Snapshot

Distracted driving is far worse than we thought. How bad? 100 times worse than the most reliable data available. Zendrive’s 2018 Distracted Driving Snapshot reveals that 69-million drivers use their phones behind the wheel every day, far higher than the 660,000 daily distracted drivers reported by government data.

We also know that we really shouldn’t be playing with our phones while driving, as it contributes to 26 percent of all collisions. But until now, we didn’t have accurate data on the extent of the problem. To mark Zendrive’s 100-billionth mile of driver data analyzed, we tried to quantify how bad the distracted driving problem is in the US ...

... Zendrive estimates that 69-million drivers use their phones each day
Compare our findings to previous research by the National Highway Traffic Safety Administration (NHTSA): NHTSA estimates that 660,000 drivers use their phones during daylight hours. Based on our experience on the streets everyday, these numbers seemed low, and our analysis found that they were low, really low.