Speaking of Errol Flynn: The swashbuckler, the teenager and the revolutionary. 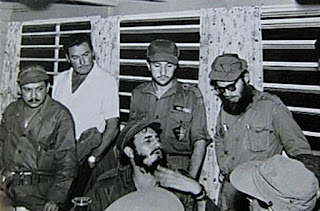 Back in the early 1980s when the "Bob & Rog Show" was a staple on the local tavern circuit, we both looked to the film star Errol Flynn with considerable reverence as a symbol of sustained dissipation.

I've now managed to live seven whole years longer than Flynn, who died at 50 of the accumulated effects of his debaucheries.

Any similarities begin and end with alcohol, and in retrospect, there is little to admire in Flynn's off-screen existence. His final flirtation was with a teenage girl, and his last movies were cheapies set in Cuba. One of them, Cuban Rebel Girls, has long been a source of fascination owing to its wretchedness, although perhaps enough time has passed to render it a cult classic.

Well past his prime, Errol Flynn agreed to star in the basement-budgeted Cuban Rebel Girls for two reasons: he was fascinated by Fidel Castro, and he needed a quick tax write-off. Flynn plays "himself," an American news correspondent on assignment in Havana. He joins a group of Castroites who undertake several guerrilla raids; among the rebels is 17-year-old Beverly Aadland, actor Flynn's at-the-time girlfriend. Cuban Rebel Girls was hastily assembled in Cuba and New York by fly-by-night producer Barry Mahon. Sadly, it proved to be Errol Flynn's last film.


Actually, it turns out the proper descriptive word is not "last." It is "penultimate," but more about that in a moment. My attention was directed to these topics by a 2013 article in the newspaper of record, in which Flynn and Aadland are reunited in a biopic of sorts.

The Swashbuckler and the Teenager; Kevin Kline as Errol Flynn in ‘The Last of Robin Hood’, by John Anderson (NYT)

... “His early performances have a wonderful dash and bravura,” said Morris Dickstein, film critic, professor and author of “Dancing in the Dark: A Cultural History of the Great Depression.” “But like Barrymore, he eventually disappeared into his own caricature and made his ‘Wicked, Wicked Ways’ his calling card.” He added, “It would have been a sad case, except that he seems to have had a good time of it.” 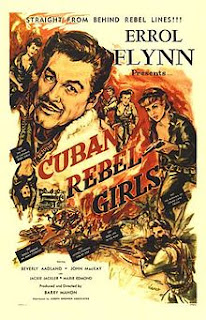 Seems there was a time for another project, too: Cuban Story, a documentary rediscovered after decades on the shelf, and finally released in 2012. While it remains posted at YouTube, you can watch an excerpt: Cuban Story.

The entire movie surfaces on occasion, and usually is yanked quickly owing to copyright infringement. It may be available elsewhere, but the snippet's enough for me.

Film star with a cause, by John Paul Rathbone (Financial Times)

A recently rediscovered film about Fidel Castro is a rare chronicle of a defining moment in world history as well as Errol Flynn’s near-redemption.


It gives a whole new meaning to "In like Flynn," which upon closer examination sounds like a great name for a commemorative beer.