SHANE'S EXCELLENT NEW WORDS: Rats are always fleeing something, whether a ship, a burning house or impending catastrophe. 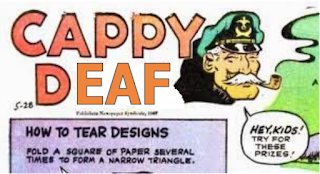 When the rats mutiny, it's time for Cappy Deaf Dick to go down with his ship -- isn't it?

'Like Rats Fleeing a Sinking Ship': A History (Merriam-Webster)

An idiom that goes back centuries

The idiom like rats fleeing a sinking ship, used in reference to people abandoning an enterprise once it seems likely to fail, has shown great linguistic tenacity, having been in regular use for over four hundred years. However, the wording and form of this standby has changed quite a bit over the centuries.

Almost all the early uses of the 'sinking ship' analogy were in reference to political scandals.

The original setting for the fleeing rats was a decrepit house, one that was on the verge of falling down. Both rats and mice, in the 16th century, were said to have the ability to know when a structure was on the verge of collapse, and would accordingly decamp some time before this happened. By the early 17th century the behavior of the rats begins to see use as a simile.

Don't suffer your Selves to be buffetted from Post to Pillar, by Pinning your Faith upon such that propose no more than to find a way out for themselves, like Rats that quit the House before it falls.
— Anon., A Dialogue Between Two Members of the New and Old East-India Companies, 1600


As a guy who enjoys an honest tipple, this stands out.

Yea, if but sicknesse come, these carnall delights will runne from you, affrighted like Rats from a house on fire.
— Richard Younge, The Drunkard’s Character, 1638


Then, to paraphrase Pete Townshend, the rats started going mobile.

It is not until the latter portion of the 17th century that the rats decide they’ve had enough of running from collapsing and burning houses, and the expression took on a new mode of egress: decamping from a foundering ship ...


Decamping from a foundering ship that's ANCHORED into place? Not yet. Maybe it's because some of them would have trouble finding another boat quite as ... er, bountiful.
Posted by The New Albanian at 4/28/2018 10:05:00 PM