Lancaster-themed "Micro Lofts" soon will inhabit Duggins' anchor wasteland at the corner of Market and Vincennes. 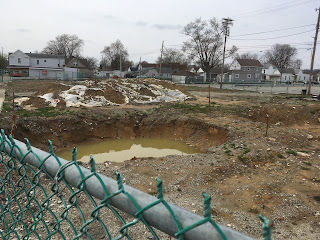 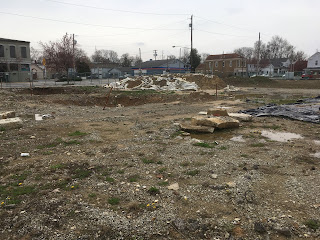 If there isn't a solid chicken-fried steak with requisite non-lumpy milk gravy coming out of one of the eateries in this planned "Lancaster nostalgia" development -- think of it as Break Wind Too -- then all the retro branding will have been in vain.

As an aside, the Green Mouse was told that former redevelopment kingpin and chief Breakwater public subsidy coordinator David Duggins, currently in charge of ensuring that public housing resembles the post-tsunami templates above, actually moved into an apartment at Breakwater at some point last year, his HWC benefits plan having expired.

Perhaps soon he'll be given a summer home at Lancaster Flats (oops -- "lofts").

It also means that Duggins will be eligible to run for office in New Albany when next year's primary rolls around -- and that's far more terrifying than the Amazing Colossal Man, primarily because we don't need a $125K councilman. 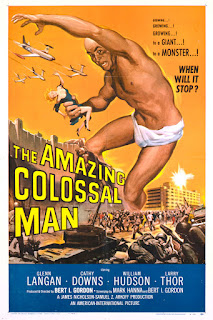 Now there's a guy who can demolish public housing lickety-split. Indeed: when will it (the corruption) stop?

Read all about the micro-lofting proposal by a company that's so progressive, they even include it in the name.

The regular meeting of the New Albany Redevelopment Commission was held on Tuesday, April 10, 2018 at 2:30 p.m., in the Assembly Room, City-County Building, New Albany, Indiana.

The second item of Old Business was the Update for the Former Market Boy/Tommy Lancaster’s Site. Matt Toole, of Progressive Land Development, presented a concept for the site. Their goal with this project is to tie in a concept back to the heritage, to include Tommy Lancaster’s and a design similar to the Mercantile Building. They are looking to build loft apartments with mixed use retail on the first level of this three story three-sided brick with HardiePlank siding on the back of the building. Handouts detailing the design of this project were passed out to the Commission Members. Mr. Toole stated that the total square footage would be about 36,000 square feet, 12,000 square feet on each floor. He explained that they had a market study conducted on the entire southern Indiana market. Mr. Toole stated that this project will include Micro Lofts, which is a new concept seen in bigger cities, geared towards Millennials and Empty Nesters that want to be able to travel and go and come as they please. Mr. Toole stated that he believes that this concept is fresh to the market country wide but is a hit in the larger Metropolitan Statistical Areas. Mr. Toole stated that they have invested three years in to this possible development. The development will include Micro Lofts as well as a larger one bedroom unit and retail space below to include small restaurants and boutique style businesses. He explained that a goal with this development is to revitalize that corridor as well as encourage residents to utilize the Ohio River Greenway to help drive growth to the City of New Albany. Mr. Barksdale stated that the Vincennes Street, uptown corridor needs help and focus. He believes that this could be the anchor to start revitalizing that area. Mr. Barksdale asked if the retail is going to face Vincennes Street only. Mr. Toole stated that they have to work around the IDEM concerns and as a result of those, the retail will mostly face Vincennes, with some of the amenities coming off of Market Street. Mr. Toole stated that there will be green space on the property as well. He stated that they meet the parking quota. The President noted that the rendering was 4 stories. Mr. Toole stated that they pulled a design that was close to what they were looking to build. The Director asked for the total project cost. Mr. Toole responded a total of $3.5 million including site improvement. The President asked if there are any potential commercial tenants. Mr. Toole stated that nothing has been finalized, but they have had interest. Mr. Middleton asked for a target completion date, to which Mr. Toole stated this would be determined by the starting point, but that this project, weather conducive, should take no more than 8-10 months. Mr. Stewart asked if these would be rentals, to which Mr. Toole responded that they would be rentals. Mr. Dickey requested that the final renderings be sent in when they become available. Mr. Barksdale motioned to approve the Development Agreement for Lancaster Lofts contingent upon legal review. Mr. Dickey seconded and the motion carried 5-0.
Posted by The New Albanian at 4/29/2018 07:47:00 AM