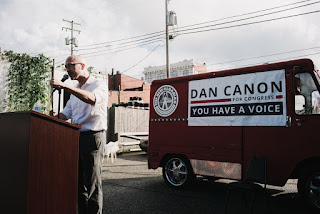 Without further ado, here is 9th district congressional candidate Dan Canon's statement about the issue of public housing in New Albany. It is a thoughtful, nuanced response, and I appreciate it very much.

As readers of this page may already know, my friends at NA Confidential have criticized me more than once for not commenting on New Albany's housing situation as it stands. Though I've often talked about housing broadly, even in New Albany, there are a few reasons for my relative silence on the specifics of this issue thus far.

First, I have been waiting for release of a finalized, official plan to see what it looks like. Housing advocates generally agree that decentralized public housing is, on the whole, a good thing. I'm hoping to see a plan that ensures no one loses their home, and that puts the folks who are currently in public housing into a better situation.

Second, there is an ever-present concern of appearing to use the poor, or any marginalized group, as a political pawn. My campaign has canvassed and called public housing residents in New Albany. For the folks we've talked to, this doesn’t seem to be a top issue (many were not aware of it at all), and so commenting on this felt almost artificial. I realize now that this is the wrong way to think about this issue - I’ll discuss that more below.

Third, there are some details I shouldn’t publicly comment on because I learned them wearing my lawyer hat, which complicates things a bit.

In the aggregate, this issue has created a unique challenge for me and for my campaign. There’s a lot of messaging power wrapped up in a race like this, and the people of my hometown are important to me, so I’ve been tinkering with an official statement for a while. The long and short of it is: none of the above reasons are good enough to maintain silence on the issue as it presently stands.

As detailed in a video my campaign produced late last year, Charlestown has run scores of people out of single-family homes in the Pleasant Ridge neighborhood by levying outrageously high fines for alleged code violations. The owners, unable or unwilling to pay fines that total more than the value of the house itself, are coerced into selling their houses to a developer for a pittance. Houses sit vacant, boarded up, falling in on themselves, while the remaining residents' property values plummet. It now looks like a scene out of the Walking Dead. The transparent - and practically admitted - goal of Charlestown's Mayor is to run enough people out of Pleasant Ridge so that the neighborhood may be bulldozed and replaced with a new subdivision; one filled with homes in the $400k range. The Mayor is on record suggesting that the residents of Pleasant Ridge, who "don't contribute anything," can simply move to a different town. I've called it the starkest example of class warfare I have ever seen in Indiana.

There are other contenders, of course. A few years ago in Indianapolis - a city which then had no secular homeless shelters - a tent city was dismantled. Around 70 refugees, veterans, seniors, people suffering from mental illness, and other vulnerable individuals were dispersed, then-Mayor Ballard expecting that they would simply vanish. Ultimately, he was right - those affected had little means, little political power, and no voice.

Prior examples such as these should be a cautionary tale for any halfway compassionate executive, legislative, or administrative body that seeks to do anything that dramatically affects housing: things often go very badly for those who are most vulnerable. So naturally, as I listen to the people in the know who would be directly affected by a plan to demolish public housing in New Albany, it seems the real torture is the fear of the unknown. Imagine being told "someday, in the near future, you will lose your home." "When?" you ask. No one knows. "Where will we go?" No one knows that either. For the poor, many of whom have been repeatedly cheated by the various institutions that govern their daily lives, not much will help ease the fear that comes with that news. Chalking it up to the usual complications of urban planning and administration doesn't help. Arcane legalese doesn't help. Pointing to the federal government’s lack of support doesn’t help. Saying "just trust us" doesn't help. Even a concrete plan, clearly put in writing for all to see, might not help. These minds will not be eased until a specific remedy is explained - as in "you will move to x address at y date and time" - and perhaps not until that specific remedy is fully implemented.

The damage is done in Charlestown. People have been displaced. Lawsuits rage on, but the neighborhood will never recover. The former residents of Pleasant Ridge will likely never be made whole, rich developers will go on being rich, and it’s unlikely that anyone will be made to account in any meaningful way. New Albany might yet be given the benefit of the doubt; Charlestown cannot. I should be clear that I haven’t spoken with Mayor Gahan or Dave Duggins prior to this statement, but I hope to. I am, generally speaking, an optimist, and so my expectation is that they and other city officials are earnestly working on a fix that will not leave anyone homeless. I understand that the folks who read and contribute to this page may not be so optimistic, but perhaps that’s as it should be. The time to ensure no one is left homeless is now; not after a neighborhood has been swallowed whole.

As such, I recognize the need for maintaining a robust public discourse on an issue like this. The fact that not many public housing residents seem to be engaged in this struggle is, in fact, more a reason to speak up than not to. When powerful interests anywhere feel like they are not being watched, they tend to run roughshod over folks who have the quietest voices. I learned this important lesson early on as an activist, I relearned it as a lawyer, and it would seem I'm learning it yet again as a politician. This is what organizations like We Are New Albany are for, to be sure. But politicians who are frequently in the public eye - and that's me these days, I guess - have a duty to speak up, too. To the extent that I've failed in that duty, I apologize to the readers of this page and to the affected residents. I grew up with you folks, I care about you and I am listening.

A final point on this: We Are New Albany has endorsed Representative Ed Clere, a Republican, as a candidate who will presumably protect their interests. Likewise, Senator Ron Grooms has had some strong language for New Albany’s Democratic administration. But GOP politicians have consistently voted for decades to keep wages low, sabotage organized labor, gut housing programs, and generally screw the working classes in every way imaginable. NA Confidential’s contributors have characterized the silence of my colleagues and me as leaving a leadership void. Perhaps they are right. While I respect Ed, I am inclined to look at both his stance and Grooms’ comments as part of a cynical ploy by Republicans - who, on the whole, are openly antipathetic to the poor - to fill that void. Naturally, I am concerned as to what they might fill it with.

Apart from voting records, in Indianapolis, we saw an example of a Republican administration’s effort to make the homeless disappear. In Pleasant Ridge, we've seen an example of how Republican administrations treat low-income residents of private housing. Maybe Ed is different, but he still plays for the same team. Right now, that's a lot like playing baseball in hockey gear, insisting that you're somehow going to change the game. Still, Ed at least shows up and puts on the gear, and there is something to be said for that.

And I get it; there are plenty of Democrats who would do, and have done, the same as the administrations in Charlestown and Indianapolis. Abuse of the poor and the vulnerable is not, and has never been, a purely partisan affliction. We can combat such abuses with vigilance, which is the promise of We Are New Albany. I can make that promise as well. The good people in my hometown deserve as much. We will be watching.
Posted by The New Albanian at 4/01/2018 09:12:00 AM