R.I.P. Carl Brown, and farewell to the Plain Brown Rapper. 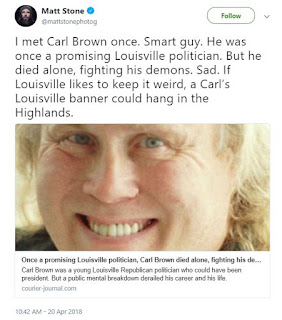 Like Matt Stone, I met Carl Brown only once, maybe twice.

I met Carl Brown once. Smart guy. He was once a promising Louisville politician. But he died alone, fighting his demons. Sad. If Louisville likes to keep it weird, a Carl’s Louisville banner could hang in the Highlands.

In his small apartment in the Highlands where he had holed up for the past year, as his moods grew darker, as he battled the bipolar disease that burst into public view one terrible, bizarre February morning 35 years ago, his body finally gave up.

Police found him on April 13 after his sister and some of his friends became concerned that they hadn't heard from him for several days and the apartment looked dark ...