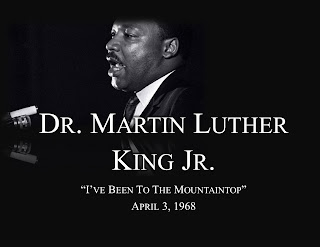 You're surely aware that Wednesday, April 4, marks 50 years since the assassination of Dr. Martin Luther King, Jr. Although I wasn't yet 8 years of age, I remember it well. I especially remember the palpable sense of anxiety in Georgetown when urban rioting greeted the news of King's death.

We have not, in the past half century, had a year freighted with such emotional and historical heft, in part because we have not seen the convergence of so many defining issues—war, civil rights, populism, political realignment—in so short a timespan. Yet the singularity of 1968 does not diminish its pertinence to our present turmoil. This week, two events in particular are worth considering in tandem: one a cataclysm, the other a tragically predictive attempt to understand how such cataclysms occur.


King had gone to Memphis in support of a strike by sanitation workers. His last speech on April 3, 1968, came to be known as the “I’ve Been to the Mountaintop” speech. In it, King made reference to a brush with death ten years earlier, when he'd been stabbed by a mentally ill woman named Izola Curry. She stabbed him with a letter opener, with the blade barely missing the aorta.

It came out in the New York Times the next morning, that if I had sneezed, I would have died. Well, about four days later, they allowed me, after the operation, after my chest had been opened, and the blade had been taken out, to move around in the wheel chair in the hospital. They allowed me to read some of the mail that came in, and from all over the states, and the world, kind letters came in. I read a few, but one of them I will never forget. I had received one from the President and the Vice-President. I've forgotten what those telegrams said. I'd received a visit and a letter from the Governor of New York, but I've forgotten what the letter said. But there was another letter that came from a little girl, a young girl who was a student at the White Plains High School. And I looked at that letter, and I'll never forget it. It said simply, "Dear Dr. King: I am a ninth-grade student at the White Plains High School." She said, "While it should not matter, I would like to mention that I am a white girl. I read in the paper of your misfortune, and of your suffering. And I read that if you had sneezed, you would have died. And I'm simply writing you to say that I'm so happy that you didn't sneeze."


For fifty years, scholars and other interested parties have been trying to locate the "sneeze" letter to which King referred. Just last week, the Wall Street Journal claimed to have unraveled the story; it seems he got the quote correct, but misattributed it to a school girl rather than the letter's real author, an adult civil rights activist who died only three years after King.

You can follow the link to the story, which was suggested to me by an observant friend. It's worth considering when (or if) an otherwise harmless misstatement merits greater scrutiny. While it doesn't sound to me as if the WSJ is suggesting there is a major historical record in need of correction, perhaps the central point is that King didn't survive to correct his own memory lapse.

The night before his assassination 50 years ago, he built a theme of his “mountaintop” speech around a fan’s letter—which has never surfaced until now

... Several historians asked by the Journal to review Ms. Kepler’s 1958 letter said that they believe it is the one to which Dr. King refers in his 1968 speech. David J. Garrow, a Pulitzer Prize-winning biographer of Dr. King, said that he is “quite convinced” that Ms. Kepler’s letter is the one. “He remembers the language exactly but just got the I.D. wrong,” he said. Mr. Bass, the Westchester historian, agrees: “He basically took that great line and kind of spiced it up.” Others said that it wasn’t the only time that Dr. King had tapped material from memory and misattributed its source.

Email ThisBlogThis!Share to TwitterShare to FacebookShare to Pinterest
Labels: 1968, assassinations, I've Been to the Mountaintop (speech), letters, Martin Luther King