Ostensibly it's an ad about the city of New Albany, but the biggest font belongs to ... that's right: Mayor Jeff Gahan. 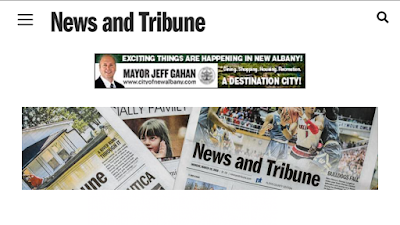 Not only that, it's a pathetic advertisement.

If a city must scream "EXCITING THINGS ARE HAPPENING IN NEW ALBANY! and "A DESTINATION CITY!" in caps with exclamation marks (gracious, who did this, Develop New Albany's in-house graphics department?), they're probably not, and it probably isn't.

It's amateurish and futile as a city tout, but of course, it's not intended as such. Does anyone know how many tax dollars went to pay the chain newspaper for this thinly disguised re-election ad?

I'd ask the city's corporate counsel, but he'd take the request, print it, use it for toilet paper, then send it back with a smiley face and a shrug: "Nope, couldn't find that one, either."

The newspaper itself might ask, but as we've observed time and again, what's the motivation for the News und Tribune to peek into the ethical quagmire of Gahanism for so long as Gahan regularly pays them for ad space?