INDOT to make funding available for railroad crossing safety projects. The path to the amphitheater might be one of them. 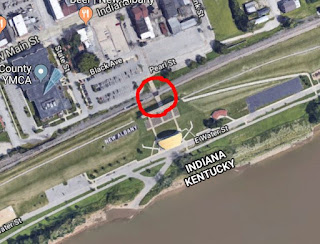 Recently State Senator Ron Grooms passed along information of importance to downtown (below). First, some background.

Among the impediments (both real and imagined) to greater use of the amphitheater is one that largely has remained outside the city's control: a railroad track carrying passing trains.

Local folk wisdom holds that the levee acts as a sort of forbidding mountain range, dissuading riverfront use. For my money, trains are a far bigger safety concern, as well as a periodic roadblock: they'll queue to the west to leave the 6th Street automotive crossing open, thus blocking the pedestrian path from downtown to the amphitheater, often for a very long time.

And I'm probably not the only person who has witnessed people climbing over the couplers. It's very dangerous, indeed.

I chatted with Grooms yesterday at WANA's Political Social. Previously he had met with Mayor Gahan to discuss the railroad crossing, and then the new INDOT program arose. It provides funds to address railroad crossing safety through competitive match grant applications. I'm told that the city has responded favorably to this, and is dispatching John Rosenbarger for due diligence.

Let's hope something comes of it. If we can't have forward-thinking, multi-modal transport networks including a light rail stop at the amphitheater, and if we must tolerate freight trains, then crossing the tracks safely is job one.

The Department of Transportation program will require local agencies to contribute 20 percent of the money for land acquisition and construction. The state would take care of the rest.

The plan is part of Gov. Eric Holcomb’s agenda to upgrade the state’s infrastructure. Holcomb signed a bill last year authorizing funding for the program, which was part of an infrastructure improvement plan approved by the Legislature that hiked taxes and fees.

Local communities may submit proposals from May until the end of August. INDOT is expected to hold several meetings this month to answer questions from local officials.

Grant winners will be announced starting in late summer.