THE BEER BEAT: "Putting the taproom first and building the rest of your business around an own-premise model gives a brewery unprecedented control, insight, and flexibility." 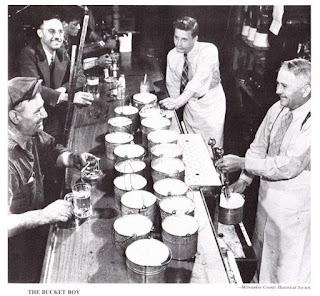 History is endlessly fascinating for a variety of reasons, among them the uncanny way that what goes around, comes around. In today, out tomorrow -- and destined to return when conditions change and the dialectic of trendiness (or purely efficient reasoning) ordains.

This whole craft brewing revolution began very locally. You trundled down the street with a metaphorical pitcher, had it filled with beer, and hoped to make it back home without drinking it all -- or, the way it was done back in pre-Prohibition times.

Then these many new breweries began packaging, which required a learning curve and the advent of reasonably priced equipment, which in turn created a bubble of sorts when approximately 3,000 brewery start-ups nationwide entered the world of wholesale beer distribution at the same time, even as satanic entities like AB-InBev acted decisively to grab as much shelf space as they could via the charming institution of Trojan Zombie Afterlife brewing  (Goose Island, Elysian, etc).

Now we've traveled full circle to the imperative of a rock-solid taproom model -- on-premise, or own-premise -- which is persuasively documented by Maine brewery owner Peter Bissell in this instructive article at Good Beer Hunting.

As an aside, here's an interesting source of information called Seek A Brew: "Use the menu at the top of the map to highlight which states a brewery distributes to. Click on a state to show a list of breweries that distribute there."

There’s Always Money in the Lemonade Stand — How the Own-Premise Model is Rewriting the Beer Industry’s Future, by Peter Bissell (Good Beer Hunting)

... In most sectors of business, there exists a collective assumption that everyone operating in that industry must have the same, or at least very similar, goals. This form of illusory correlation is easy to understand. In an era of laptop entrepreneurship, commercial brewing still has all the trappings of red-blooded classical American Capitalism—tangible assets, investors, bank loans, supply chains, and distribution networks. As such, there’s overwhelming acceptance and enthusiasm behind the “growth is good” and “more is better” capitalistic war cries resonating in the beer world with every announcement of a major expansion, distribution into a new state, or corporate acquisition.

In this arena of unprecedented saturation, we must come to accept that “growth” will mean different things for different people. Producing more beer doesn’t necessarily mean a better situation for your company. Indeed, we’ve never in history had so many communities be able to tout their neighborhood breweries as producers of world-class products. For many of us, producing more beer is not just a question of tank and floor space, hop contracts, and brewery staffing, but of where else could this beer go that people will buy it? In the last few years, I’ve watched as numerous brands—respected, even legendary, in their home areas—enter the Southern Maine market only to see permanent, gigantic pyramids of their products sit on the floor of Whole Foods in perpetuity. Indeed, it seems that regions known for great beer attract out-of-market brands looking to expand—but demand for these beers wanes in lieu of local options.

So then, how do you make the right decisions regarding growth, when it's very clearly a fluid, subjective concept in the totally splintered beer market of 2018? For Bissell Brothers, and for many breweries in the Northeast and elsewhere, the answer was, and is, the taproom. The taproom! The on-premise experience. Putting the taproom first and building the rest of your business around an own-premise model gives a brewery unprecedented control, insight, and flexibility—all crucial tools when navigating this exciting and complicated time in the beer business ...