Martin Luther "prefigured modern-day evangelicalism, and a look back at his life can help explain why so many evangelicals support Trump today." 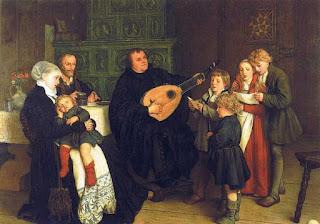 In 1989 during my month's stay in East Germany, three of us skipped work one day and took the train to Lutherstadt Wittenberg on the Elbe River to the southwest of Berlin.

Wittenberg is where Martin Luther may have posted his 95 theses on the cathedral door (this isn't definitively known), but it's definitely where he kicked off the Protestant Reformation. Soon I'm hoping to begin digitalizing the slides from the trip, and maybe after seeing the photos I'll remember a bit more about the day apart from buying bottles of beer and drinking all the way back to base camp.

All I knew about Donald Trump in 1989 is what I'd read while abstracting magazine articles at the long defunct UMI-Data Courier. It wasn't a favorable appraisal, and my impression cannot be said to have improved.

Trump's more vinegar than vintage wine ... but when it comes to the sweet taste of exposing the breathtaking fraudulence of white American evangelicals, I've got to hand it to the kitschmeister. It may be the only mission he's accomplished as president, but I cannot think of a more important one.

How Martin Luther Paved the Way for Donald Trump, by Michael Massing (The Nation)

To understand why evangelicals support the president, look to the first Protestant.

... The verdict is clear: In supporting this thrice-married, coarse, boastful, divisive, and xenophobic president, evangelicals are betraying the true nature of Christianity. In making such charges, however, these commentators are championing their own particular definition of Christianity. It is the Christianity of the Sermon on the Mount, in which Jesus blesses the meek, disdains the rich, welcomes the stranger, counsels humility, and encourages charity. “Do not resist an evildoer. But if anyone strikes you on the right cheek, turn the other also,” he declares—a most un-Trumpian sentiment.

Yet this irenic message is just one strain in the New Testament. There’s another, more bellicose one. In Matthew, for instance, Jesus says, “Do not think that I have come to bring peace to the earth; I have not come to bring peace but a sword”—to “set a man against his father, and a daughter against her mother, and a daughter-in-law against her mother-in-law.” In John, he declares, “I am the way, and the truth, and the life,” and “no one comes to the Father except through me”—a statement long used to declare Christianity the one true path to salvation. The Book of Revelation describes with apocalyptic fury the locusts, scorpions, hail, fire, and other plagues that God will visit upon the earth to wipe out the unbelievers and prepare the way for the Messiah.

From the earliest days of the faith, this militant strand has coexisted with the more pacific one. And it was the former that stirred the founder of Protestantism, Martin Luther. In his fierce ideas, vehement language, and combative intellectual style, Luther prefigured modern-day evangelicalism, and a look back at his life can help explain why so many evangelicals support Trump today.

In defending the cause of Christ, Luther was uncompromising. No one, he wrote, should think that the Gospel “can be advanced without tumult, offense and sedition.” The “Word of God is a sword, it is war and ruin and offense and perdition and poison.” In Luther’s famous dispute with Erasmus of Rotterdam over free will and predestination, the renowned Dutch humanist suggested that the two of them debate the matter civilly, given that both were God-fearing Christians and that the Bible was far from clear on the subject. Exploding in fury, Luther insisted that predestination was a core Christian doctrine on which he could not yield and that Erasmus’s idea that they agree to disagree showed he was not a true Christian ...