From Colokial to DADA in two blocks or less, with a sideways glance at DNA's tacky mobster tactics. 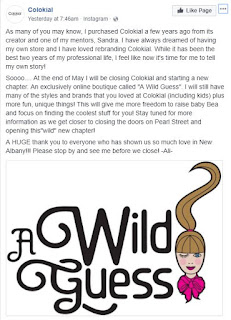 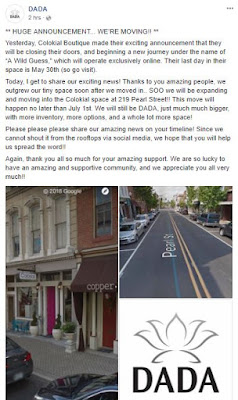 The upshot: Colokial closes so its owner can transition to a different business model, and DADA moves from Underground Station into the vacated Colokial space because it needs more square footage, leaving behind an affordable slot that might be regarded as an incubator, or become the permanent location of a niche business.

It all makes perfect sense. To reiterate thoughts expressed in this space after Feast BBQ and Comfy Cow recently closed, downtown must be viewed as a dynamic in progress. As long as usable spaces are being occupied, there's nothing much else to say, and there'll be steps forward and backward. The aim is to keep moving forward.

Obviously, this doesn't excuse City Hall from maintaining infrastructure, or independent small business owners from cooperating; in both instances, we could be doing a better job of it.

It also points to the ongoing folly whereby Develop New Albany, the city's anointed events contractor, stages monthly merchant meetings to read top-down scrolls from Dear Leader rather than engaging folks who are investing with real money on the ground every day about ways to identify and address preconditions for successful commerce.

Lately DNA seems to spending the bulk of its time in an active effort to isolate and discredit former volunteer Kelly Winslow via the usual mobster tactics backed by the clout of Team Gahan.

Why? Because Winslow's non-subsidized grassroots New Albany Social is doing a better job than DNA with fewer resources (read: none), even as DNA's prerequisites when planning come-to-city events must always include a percentage of the take to pay a staff person's salary.

DNA's poorly concealed vendetta against Winslow owes to what the small-pond pillars perceive as a threat to their monopoly. It's sad and stupid, and amazingly, entrepreneurs continue to do what they do best, survive and sometimes thrive, set against this backdrop of Gahan-encouraged junior high school hijinks.

All the best to A Wild Guess and DADA.

To me, job one remains encouraging density in downtown residency, not by bribing huge developers to pursue one or two showpiece projects, but providing fair incentives for a dozen smaller ones.

The more people living within walking and biking distance of historic downtown business district, the better the business climate, and the speedier the shift to balanced offerings; as Bluegill has been asking forever, how far must one walk from his or her home NOT to drink craft beer or eat Peruvian street food, but just buy a damn roll of toilet paper?