Your turn, buster -- or, this isn't the usual rant about potholes. 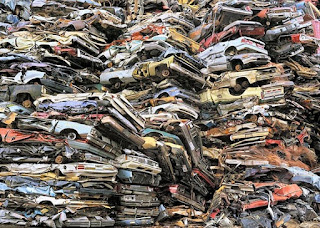 I'm eternally fascinated by the notion that potholes, as a specific minority subset of broader street and highway conditions, can be relied upon to trigger endless, intemperate diatribes and vitriolic rants of the sort that almost never greet so many structural inadequacies (water, health care, sanitation, affordable housing) that impact the living conditions of humans when they're not inside their cars.

Over the past century, our entire civilization has been radically reconfigured to meet the every need of your car, and you're generally spared paying the REAL COSTS of maintaining this lopsided value system -- and yet you're still not happy.

You won't pick up the trash or shovel snow off the sidewalk in front of your own house, but damn it, the streets must be paved with gold to get you back and forth, and the traffic lights synchronized, and any impediment to speed -- including other human beings relying on two legs rather than six cylinders -- obliged to get the hell out of your way.

Come to think of it, I don't recall participating in the election that resulted in your automotive needs being declared paramount.

I'll tell you about potholes: If you didn't insist on driving at interstate speeds on side streets, and if you paid attention to what you're doing behind the wheel instead of trolling co-workers on Facebook, maybe potholes wouldn't bend your rims and ruin your climate-controlled mobile sofa.

When are THEY going to fix the potholes?

Howzabout YOU get out there and do it, huh?

Two guys tired of waiting for the city to fill potholes, so they're doing it themselves, by Domenica Bongiovanni (Indy Star)

You could argue that citizens filling potholes is a popular storyline in Indiana. "Parks and Recreation's" Ron Swanson met his third wife after she complained to the fictional city of Pawnee about gaping craters on her street.

The famously libertarian Swanson, played by actor Nick Offerman, cut through the bureaucratic red tape and shoveled asphalt into the chuckholes himself.

After filling a pothole near 52nd Street and College Avenue on Saturday, IUPUI student Chris Lang laughed about the episode, which aired on NBC in October of 2012.

"I even have a Ron Swanson poster up," Lang said of his apartment decor. "I like him a lot."

In fact, some of Swanson's libertarian beliefs overlap with those of Lang, 22, and Mike Warren, 28. The duo created Open Source Roads, a grassroots organization comprising volunteers who fix Indianapolis' pothole-riddled streets. Open Source is a call to action that's built upon action itself. Warren and Lang — and sometimes up to five of their friends — spend their spare time fixing some of the worst chuckholes on side streets.

"We want to fill a lot of potholes, and we want people to help out and see that we don't need to rely on this monopoly for it, and I want that to be what starts the people in charge talking about change," Lang said.

"If the city is going to fail at their own monopoly, why should they have that monopoly?" he said.

Email ThisBlogThis!Share to TwitterShare to FacebookShare to Pinterest
Labels: car-centrism, do it yourself, Indianapolis, potholes, rants