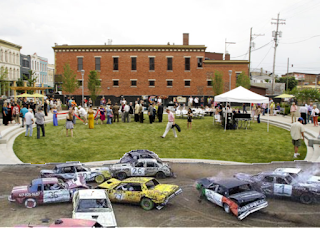 Then, City of New Albany Government at Facebook. The last mention of streets came on August 22.

Maybe Develop New Albany could be of help. Needless to say, neither streets info nor repentance is to be found there. 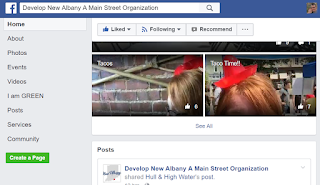 However, we're told that today at some as yet undefined juncture, Spring Street will revert to two-way traffic after a half-century in captivity.

Pearl and Bank are to follow tomorrow, then Market, and finally Elm. September 30 is the deadline for erasing the city's damaging one-way mentality, albeit it with anchors symbolic of stasis marking every corner.

Imagery never was their strong point. As luck would have it, I'll be in Indianapolis the next two days. On social media, my co-conspirator Jeff Gillenwater (who is welcome to post in my absence) summarized the end of the beginning.

The gist of the arguments seems to go something like this: Spending money to redesign streets is a waste because it will have no positive effect. People driving cars will not slow down and pay more attention no matter what you do. However, if there are any problems on those streets in the future owing to those drivers not slowing down and not paying more attention, they can be attributed pretty much entirely to the redesign.


From the inception of the city's grandiloquently fashioned "Downtown Grid Modernization Project," I've tagged it with snark as a rumor. You would, too, had you spent more than a decade listening to barely cognizant local politicians assure you that progress was just around the corner, and when the corner proved to be as distant as free beer tomorrow.