30 years ago today: (May) Vivid views in Siena. 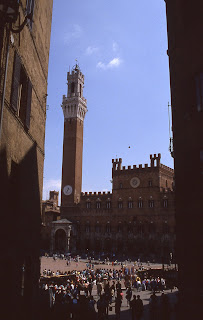 Previously: 30 years ago today: (May) Florence, La Botteghina Rossa, The Decameron and some quality time in Italy.

It is only 80 kilometers from Florence to Siena, which took two hours by train in 1987. Both cities struck me as self-conscious, though in radically different ways not pertaining strictly to disparities in size. There had been many tourists in Florence even for May, and far fewer in Siena, but I found the latter more interesting.

Sienna (from Italian: terra di Siena, "Siena earth") is an earth pigment containing iron oxide and manganese oxide. In its natural state, it is yellow-brown and is called raw sienna. When heated, it becomes a reddish brown and is called burnt sienna. It takes its name from the city-state of Siena, where it was produced during the Renaissance. Along with ochre and umber, it was one of the first pigments to be used by humans, and is found in many cave paintings. Since the Renaissance, it has been one of the brown pigments most widely used by artists.


Size was part of it. As best as I can determine, I stayed at a hostel called Casa del Pellegrino (Santuario di S. Caterina) at via Camporeggio 31. The price was circa $7.50 for a bed in a dorm room, and the location fairly central. A 20-minute walk took me completely out of town, into the fields.

In significant respects, Siena now is the result of centuries of forethought as to exactly what Siena should be, and how it might remain that way.

Siena is the embodiment of a medieval city. Its inhabitants pursued their rivalry with Florence right into the area of urban planning. Throughout the centuries, they preserved their city's Gothic appearance, acquired between the 12th and 15th centuries. During this period the work of Duccio, the Lorenzetti brothers and Simone Martini was to influence the course of Italian and, more broadly, European art. The whole city of Siena, built around the Piazza del Campo, was devised as a work of art that blends into the surrounding landscape.


To reiterate, with inexpensive hostels customarily closed for cleaning (the "lockout") from mid-morning into the afternoon, there was no possibility to loiter around one's hotel room. In my case, this meant hours of wandering, learning, resting, reading, and in general, just taking it all in.

I believe this is why Siena remains with me as a feeling more than any specific memory. The colors, the architectural preservation, and the brilliant, clear skies during my stay. It's a dreamy sort of recollection, and upon reviewing the photos for the first time in two or more decades, I'm struck by the abundance of churches.

This view was just a few steps from the hostel door. The Basilica Cateriniana San Domenico is to the right, and the Duomo di Siena (Siena Cathedral) on the hill. 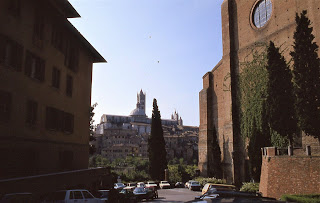 As was my habit during those early trips, I proceeded directly to whatever portal existed to ascend for the best view, whether a hilltop castle, church steeple or Siena's 334-ft high Torre del Mangia.

The tower was built to be exactly the same height as the Siena Cathedral as a sign that the church and the state had equal amounts of power. Literally meaning ‘Tower of the Eater’, the name refers to its first bellringer, Giovanni di Balduccio, nicknamed Mangiaguadagni (‘eat-the-profits’, or, ‘profit eater’) for his spendthrift tendency or his idleness or gluttony.


Up the stairs I went for an incredible vantage point. The Duomo is first. 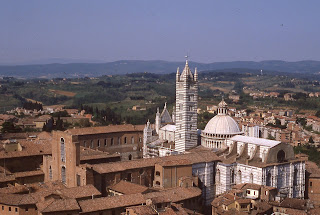 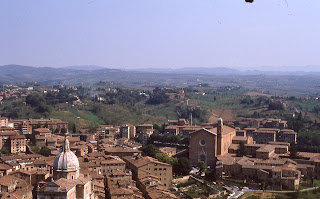 Below the tower is the Piazza del Campo.

Popularly known as 'Il Campo', this sloping piazza has been Siena's civic and social centre since being staked out by the ruling Consiglio dei Nove (Council of Nine) in the mid-12th century. Built on the site of a Roman marketplace, its paving is divided into nine sectors representing the number of members of the consiglio and these days acts as a carpet on which young locals meet and relax. 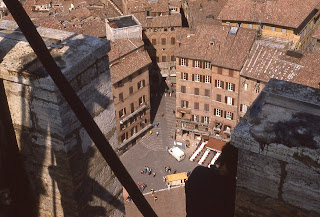 I missed Il Palio, but it sounds fascinating.

The Piazza del Campo is also a theatre for one of the most time-honoured, sporting events, not just in Italy, but the world: Il Palio. The Palio is a competition that looks like an equestrian merry-go-round and its origins are medieval. The race - traditionally called the carriera - is held twice a year.


Here is a borrowed image from the preceding web site. 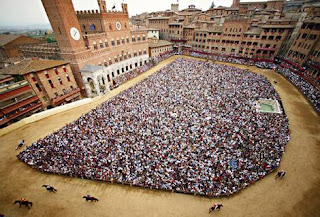 Returning to my lofty perch, I'm reasonably confident this church on the edge of town is San Niccolò al Carmine. 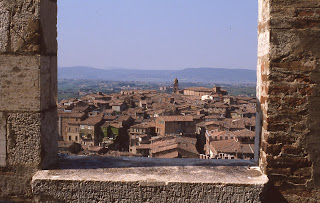 What strikes me about these photos from the top of the Torre del Mangia is the contrast between the sienna of Siena and the countryside just beyond.

Back at ground level, three views of the Duomo. 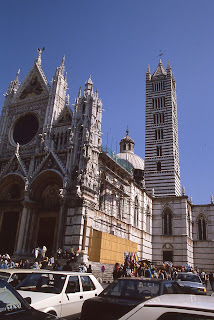 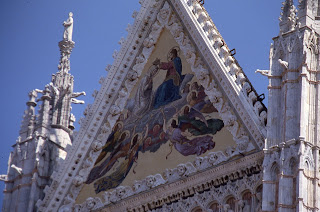 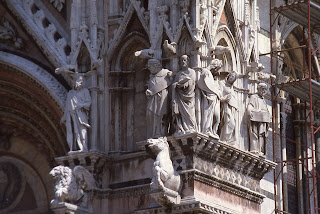 After climbing to the top of something, I was fond of photographing where I'd been. The Torre del Mangia towers over the Piazza del Campo, where I may have consumed a single beer in an outdoor cafe (budgetary restrictions, alas).

I'm not sure where my vantage point was, but it's a view of the city center looking south, with Basilica Cateriniana San Domenico in the foreground. 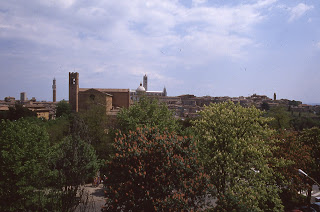 On my third Siena morning, I was off to the bus station for a day trip to San Gimignano, one of the most unique towns I've ever been.