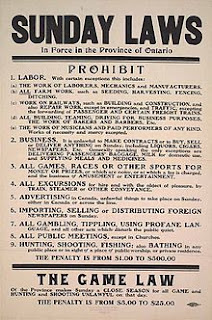 I've decided to post this link on Saturday so you'll have time to read it before Sunday, when you can readily purchase cold beer to go at your local brewery, but not at a liquor store or a grocery.

We still refer to restrictive laws like these as "blue," but as Eric points out, the prime motivator usually is green.

SCHANSBERG: A history of Sunday and what it has to do with beer, by Eric Schansberg (Funding 'Bama on Bill Hanson's Knee)

In his new book, “A Brief History of Sunday,” Justo Gonzalez explains how we arrived at our sense of Sunday and “the Sabbath.” It is worthwhile to review this history and then consider how it relates to “blue laws” — legislative restrictions on economic activity on Sundays.

Before Christianity began to dominate world culture, civilizations used different ways to identify “weeks” and “months,” needing to observe lengths of time between days and years. Setting the table for Christianity, the Jewish calendar was built around a seven-day week, with its Creation-based Sabbath.

I'll cut directly to the part about "blue laws," because this is a beer column, after all.

Of course, legislation and political economy are always a matter of theory vs. practice. If one wants to legislate rest, the ideal may be prayer, study, acts of service and devotion. But those who don’t want to pray or pray so much will do other things with their “spare time.” So, the reality was often a desire to play instead of pray — something that legislation also sought to regulate.

This brings us to today’s “blue laws.” While fading in recent decades, such laws are still on the books in many states. In Indiana on Sundays, for example, dealers cannot sell cars. And as the recent case of Rickers Oil Co. reminded us, there are restrictions on alcohol sales (although fewer so for bars, restaurants and breweries and wineries that have been granted exceptions by the state).

An economist would expect “blue laws” to be driven by three motives ...

You'll have to go to the newspaper to read the rest, but it's worth the time. Will Indiana's legislature ever get its act together with regard to the crazy quilt of conflicting alcohol laws, exceptions and re-exceptions?

Thanks Roger-- and thanks for your help with the essay!

If people can't see the NT version or want a longer version (that will appear in the Indiana Policy Review's journal down the road), one can check out my blog directly.

Check -- it's an interesting topic; I'd never thought that much about the origin of Sunday.