ASK THE BORED: Tucson's first rainbow crosswalk -- and we get stuck with dozens of lousy anchors enabled by municipal cowardice. 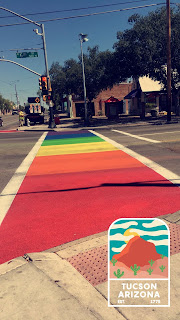 Yes, those bright rainbow colors are far more cheering than the sad visages of the bureaucrats.

Crosswalks are likely to be a theme this morning when the bored of works convenes to ensure that New Albany's built environment rigorously conforms to the mayor's barren and denuded inner artistic vision. 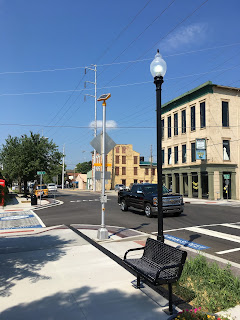 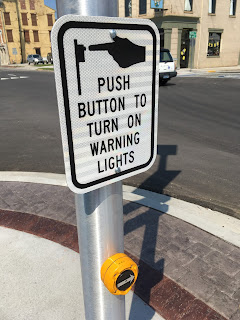 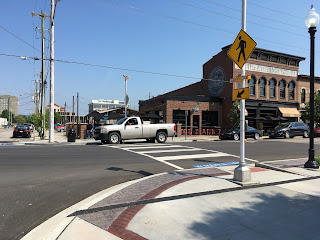 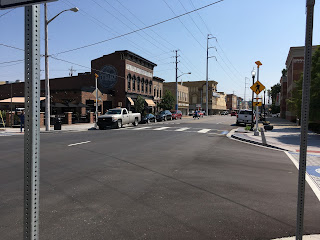 CM David Barksdale added that in his experience, the flashing lights not only fail to make an impression on drivers far too busy checking their iPhones, but also taper off too quickly once daring walkers have waded into the street.

In fact, the modern-day sharrow is a symbol of civic cowardice, as is the reluctance of Team Gahan to institute measures that might actually slow traffic and make streets safe for all users.

Simply stated, using $3 million of the federal government's money to complete a grid modernization program is not, in and of itself, the solution. It isn't victory. Rather, it's a beginning.

Last week, city engineer Larry Summers insisted that the speeding problem at Main and 10th dogleg -- future site of another solar-enhanced crosswalk-- could be corrected without need of a stop light or four-way stop, when Occam's razor suggests the simplest answer to be the best: just stop traffic there with a light or sign.

Spring Street is not a highway. It is a street in a heavily populated urban area, and until Team Gahan's functionaries can wrap themselves around this concept, these failures in imagination will continue.

Should't their be a garbage can at every streetside bench and crosswalk?

Doesn't the fact that downtown garbage cans constantly overflow indicate (a) people will use them, and (b) they need to be emptied more often?

We close today with this thought about the grid "modernization" project's utter failure to make good on the promise of Jeff Speck's recommendations, as written by the junior editor, Jeff Gillenwater.

Now that they've cut the grooves for the lines on Market Street, you can finally get quite a nice view of all the wasted space. Coming out of downtown from west to east, they clearly made the parking lanes a couple feet wider than needed on both sides of the street in order to fill the void where Jeff Speck's group had originally planned a bi-directional bicycle track. Then, at 13th Street, bike lanes connected to nothing magically appear. By the time they're finished with neighborhood streets around here, they'll have spent $5 - $6 million doing what they could have done much, much better for less than half. It's really no wonder they worked so hard to keep the plan a secret. New Albany city government: all idiocy, all the time.