The ways most states and cities set speed limits? A study shows "how these standard practices may actually lead to more speeding-related fatalities and injuries." 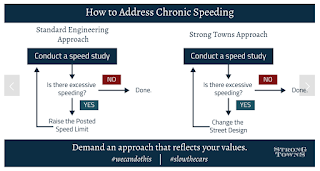 Jeeebus, what a week. I believe there are a substantial number of people locally who are willing to assert that the sun rises in the west and sets in the east -- to give up their first born to the French Foreign Legion and eat durian fruit on their toast for breakfast -- just so long as they can avoid admitting that I'm right about something.

This is priceless, and it pleases me to no end.

But enough of that.

Let's talk about how speed kills. The report in question deals strictly with passenger vehicles, but the correlations with other road users are clear. Here are two excerpts.

The safe system approach introduced in the report considers the vulnerability of all road users. How will the recommendations make streets safer for people like you who commute by bike, and those who walk, bicycle, use transit, and drive?

We can’t talk about speeding without talking about people who walk, bike or use transit, younger and older road users, and people with disabilities. The safe system approach, discussed in the report, incorporates the needs of all road users, especially vulnerable ones. Although this report focuses on passenger vehicles, some recommendations apply to all road users by ensuring that appropriate speeds are maintained and enforced.

How does the study treat the influence of road design on traffic crashes?

The report focuses on countermeasures that are considered less widely accepted. But it is important to note that [changing] road design to address speed-related crashes is not yet widely implemented, even if it is generally accepted as good practice. Some jurisdictions are already addressing speed-related crashes using road design, by using Fatality Analysis Reporting System (FARS) data related to infrastructure and other data-driven measures. Some states, as I have seen firsthand, are already including speed as an emphasis area in their Strategic Highway Safety Plans (SHSP). Some jurisdictions are using design manuals with features that enhance compliance for lower speed limits rather than simply lowering speed limits.