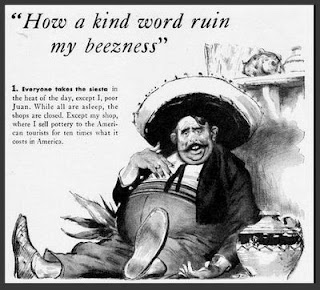 Apropos to nothing in particular, were you aware of this blog?

The new and improved Tex[t]-Mex Galleryblog™ devotes itself to the aggressive, relentless, and, at times, pathological interrogation of Mexican, Latina/o, Chicana/o, "Hispanic," Mexican-American, and Latin American stereotypes. It is both the online supplement to and the bastard sister of a 2007 University of Texas Press book. The book, marketed for the general public (not just academic cultural studies wonks) and a perfect (if a tad garish) stocking stuffer, is also available from Powells, Amazon.com, and LA's rad Skylight Books.


The educational opportunities are virtually limitless, but here's a particularly instructive blog entry: Hipster Ode: Sombreros, Zarapes, and the Witchy Magic of Tequila. 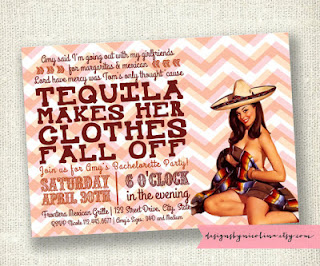 Well there! Thanks to our friend Miguel-Angel Soria for the saucy linkazo to Etsy, the hipster DIY mercado. This stationer was so inspired by the dreamy voice of Joe Nichols' song: Tequila Makes her Clothes Fall Off, she designed a bachelorette party invitation as a loose-fitting ode to the song. No need for the Algebra degree. Etsy-selling lady figured it all out. ¿Cierto?

A taste of the salty lyrics (no lime required.)


"Them pantyhose ain't gonna last too long
If the DJ puts Bon Jovi on
She might come home in a table cloth.
Ya tequila makes her clothes fall off"


Unconvinced by a blog? Confident that this troublesome blogger probably comes without the sort of academic credentials designed to make you sweat? Wrong again. The blog's creator ...

William Anthony Nericcio is Professor of English and Comparative Literature at San Diego State University in California, where he also serves on the faculty of the Center for Latin American Studies and the Department of Chicana and Chicano Studies.


... has even written a much praised book on the topic.

Tex[t]-Mex: Seductive Hallucinations of the "Mexican" in America, by William Anthony Nericcio

Nericcio engages in close readings of rogue/icons Rita Hayworth, Speedy Gonzalez, Lupe Vélez, and Frida Kahlo, as well as Orson Welles' film Touch of Evil and the comic artistry of Gilbert Hernandez. He playfully yet devastatingly discloses how American cultural creators have invented and used these and other Tex[t]-Mexicans since the Mexican Revolution of 1910, thereby exposing the stereotypes, agendas, phobias, and intellectual deceits that drive American popular culture. This sophisticated, innovative history of celebrity Latina/o mannequins in the American marketplace takes a quantum leap toward a constructive and deconstructive next-generation figuration/adoration of Latinos in America.


Why bring this up?

Just because I believe in teachable moments -- nothing more, nothing less, and if the ones who should be doing it refuse to so much as answer e-mails, I'm eager to step into the breach with source material.
Posted by The New Albanian at 8/19/2017 06:58:00 PM