30 years ago today: (May) The unique towers of San Gimignano. 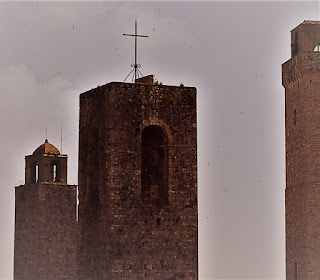 Previously: 30 years ago today: (May) Vivid views in Siena.

San Gimignano is like nothing you've ever seen. Small wonder that my first stop was a farmers market for winemakers. Sustenance, you know. 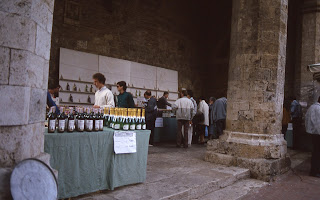 I'll be relying entirely on words you can read at the website of San Gimignano, "city of the World Cultural and Natural Heritage of UNESCO." My own experience was one of bedazzlement and wonder, and instead of recapping the delirium, let's learn what made San Gimignano into what we see today. 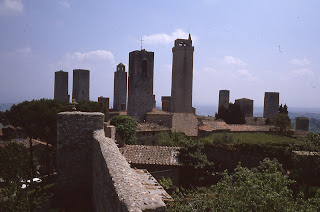 "San Gimignano mainly developed in the first three centuries of the Millennium, thanks to its favourable geographical position. In High Middle Ages the Via Francigena, first traced by the Lombards, became the route of pilgrims who travelled to Rome, mainly from France. The detour to the port of Pisa grafted in San Gimignano, and the town, settled around the hillside variation of the Via Francigena, became one of the most important transit and stopping sites for all travellers." 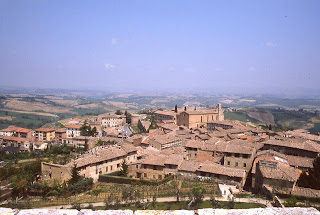 "The economic, architectonic, and cultural boost of San Gimignano stopped around the first half of the fourteenth century, when the Commune submitted to Florence.

"After 1348 San Gimignano would never attain again the economical and demographical previous levels. Drastic depopulation and economical decline, together with the loss of political autonomy, produced a clear breakdown: towers fell down, or they were cut off, the palaces got damaged, and due to the general decay no trendy events took place in San Gimignano for centuries. This is why the historical centre of the town remained unchanged and escaped the influences of the different styles that would follow till the end of the nineteenth century, when the "gothic renovation" took place. From the fifteenth century onward there were few urban additions: the Rocca di Montestaffoli, a fortress built by the Florentines with defensive purposes against Siena, a few buildings, some small churches, unimportant maintenance works." 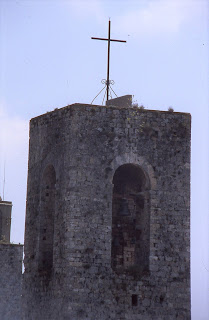 "San Gimignano rises on top of a hill 334m above sea level, clearly visible in the distance with its many towers. Today 13 towers remain of the 72 towers of the fourteenth century, when every well off family built a tower to show its economical power (many of them are still visible in the buildings, even if they were cut off).

"The first towers rose wide apart in a rarefied urban fabric looking very different from the nowadays compact centre. Towers were used in a different way. Rooms were very narrow, generally 1x2m; there were a few openings, and the walls, about 2m thick, assured cool temperature in summer and hot in winter. Almost all the towers were built next to other buildings in perishable materials such as wood and earth. In medieval times the tower was the higher symbol of power, mainly because the building process was not simple or cheap at all. Materials needed to be dug and transferred to town, and the building site arranged. Only the richest families of merchants and moneylenders could afford the works of construction.

"The house occupied just part of the tower. The ground floor consisted of workshops, the first floor of bedrooms, and the higher level of the kitchen. The destination of each room followed the simplest security rules. The kitchen, where a fire was usually lighted, was located on the highest live-in room, to escape in case of accidental fire." 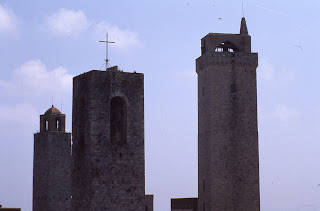 "During the twelfth century the changes in the buildings were mainly directed to improve the daily life. The need of larger inside spaces and of wider openings brought to new building models, which mainly involved the towers.

"The reference model for the towers built between the first half of the twelfth century and the first half of the thirteenth century is the so-called Pisa model, exported from the famous Tuscan maritime town. According to this style, buildings had one or more high and narrow openings on lower levels, which cross the tower from side to side. The openings that stretched for several levels were shared inside by wooden floors, which corresponded to outside full-wide wooden balconies. With these balconies inner spaces were expanded outside the walls of the buildings." 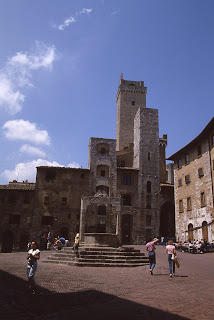 "Since the first half of the thirteenth century towers were not built anymore, whilst palaces were built according to the most up-to-date and fashionable trends of that time. Since the first half of Duecento, the major Tuscan art towns such as Florence, Pisa, Lucca, and Siena developed some peculiar architectonical features, different for each town. This is not the case for San Gimignano, where architecture developed according to eclectic features, merging different styles and influences from different towns the Commune had come in touch with. The outcome is a very original and peculiar architecture." 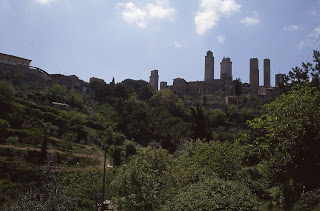 By early evening the bus had returned to Siena and a final night at the hostel. I've ever returned to Siena or San Gimignano in three decades since these days in 1987, and while details may have eroded, impressions are still very vivid.