30 years ago today: (May) Florence, La Botteghina Rossa, The Decameron and some quality time in Italy. 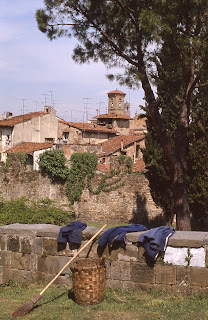 Three decades later, my personal relationship with Italy remains a mystery. It's some sort of boomerang.

There, enthralled by this lesser-touristed city in the shadow of Mt. Etna, I emitted a lengthy chain of expletives and asked myself why it had taken so long to get back. So, why was I interested in Italy, and how did I become disinterested?

In the early days, I think it was a pedagogic itch in need of scratching. In 1985 and 1987, my aim was the classic grand tour, to soak up bits and pieces of everything, and to absorb whatever I could of European culture and history. There always was a latent fear that someday, my travels would come to an end.

Perhaps inevitably, specialization crept in. Perspectives began shifting in the early 1990s during the period of my escalating involvement in beer as business.

The deeper I got into beer, the more I wanted to spend the brief travel time I had visiting the classic Northern European beer lands. It was tax deductible, too -- without even cheating.

At the time, little was happening in Italy in terms of beer, although it must be clearly stated that since the early 2000s, there has been an incredible explosion of craft beer in Italy, probably among Europe's largest proliferation on a per capita basis.

These days, Italy is an important stop on a Euro beer itinerary. I sense a balance in need of recalibration, and I hope to do so in coming years. Fabio, if you're reading -- this means you.

With a sole exception, the culinary details of my dinner with English Paul and the Texans are lost to obscurity, but I remember the venue quite well. It was called La Botteghina Rossa, and was located at 24r Via Degli Alfani, about a mile and a half from my lodging.

Searching in 2017 with Google, I see no sign of the restaurant on this street, although there are a couple of Chinese carry-out spots just down the way. There is another restaurant by the same name doing business today, at Borgo San Frediano 26/R, but it bears no resemblance. In 1987, what made La Botteghina Rossa special is summarized by this description in Frommer's Europe on $25 a Day (1984 edition; the quoted price was a bit higher by the time of my visit):

(Because it) possesses only two long tables with 24 seats apiece, you have no choice but to meet your fellow communal diners, and interesting mixture of local artists, students, low and high society. They flock here for an astonishingly copious 8,000 lire ($5.71) three-course menu that includes free wine and mineral water, hors 'd oeuvres (curried rice, olives, sardines, beans-onions-tomato salad, minced carrots, spice pickles and caviar, to name just a few), followed by pasta with meat sauce, then, for the main course, grilled fish or a meat dish. Served on Limoges or Rosenthal china, the food is so plentiful that you probably won't even touch the (free) bread. Stately Senora Ferdinanda Martini Monti vedova Dini Foschi, who watches over all with aristocratic mien, has personally guaranteed the 8,000 lire price until March of 1985 to anyone showing a copy of this book upon entering.


This passage also gives you an idea of the way Arthur Frommer's published travel advisories operated. Obviously, lots of people showed up at La Botteghina Rossa carrying a guidebook, and in summer, there were many more tourists than cheapskate locals. As a side note, Frommer lives; he's 88.

Here is my sole memory of the meal: either as an appetizer or maybe a modest final course, there were orange sections. I took a big bite, and was completely confused because it was bitter, and unlike the sweet oranges sold in American supermarkets. One of those teachable moments, for sure.

The slides have been left in chronological order. Leading off, the Ponte Santa Trinita -- the "other" bridge in Florence.

Although the Ponte Santa Trinita may not have the wow factor of the Ponte Vecchio, it’s graceful architecture and decorative details make this bridge a stunner in its own right. 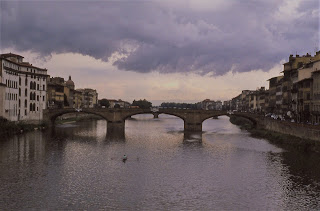 The Palazzo Vecchio and Piazza della Signoria are focal points for tourism.

Palazzo Vecchio is the main symbol of civil power for the city of Florence, whose original project is attributed to Arnolfo di Cambio. Construction on the solid fortress began in 1299 above the ruins of the destroyed Uberti Ghibelline towers, testimony of the final victory of the Guelph faction. 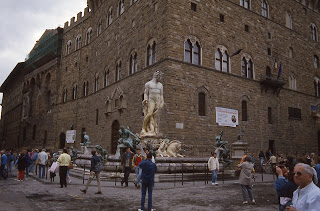 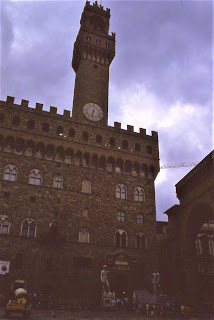 I'm not sure if this detail is from a door at Palazzo Vecchio or the Duomo. 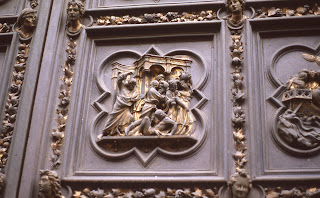 The Duomo is inescapable.

Florence's cathedral stands tall over the city with its magnificent Renaissance dome designed by Filippo Brunelleschi, with the baptistery right across. The cathedral named in honor of Santa Maria del Fiore is a vast Gothic structure built on the site of the 7th century church of Santa Reparata, the remains of which can be seen in the crypt. 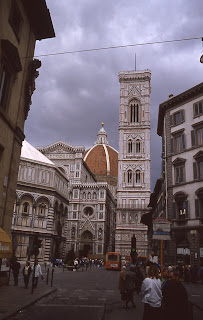 Another magnet is the Ponte Vecchio.

Arguably, Florence’s most famous free attraction is the Ponte Vecchio. Centuries of writers have waxed poetic about its picturesque shops, and an uncountable number of lovers have dramatically declared their love by securing padlocks to the bridge’s fence and throwing the key into the Arno below. But the bridge is more than beautiful – it’s central to Florentine history. 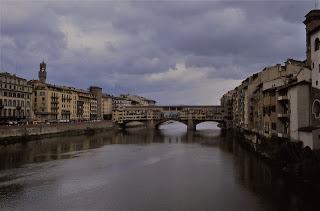 My hostel was located on a street called Via Santa Monaca in the Oltrarno neighborhood, across the Arno River from the city center. It doesn't seem to be there any longer.

The following series of photos are from my third day in Florence, when the weather finally cleared and I walked a couple of fruitful miles from the hostel to a scenic hillside viewpoint called Piazzale Michelangelo, which offered commanding views of the heart of Florence. These days, a massive parking lot for buses and private cars has been built there. I don't remember that, although as you can see, my memories are exceedingly hit-and-miss. 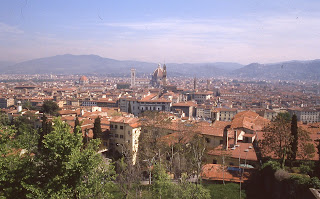 At some point during this walk I turned around to face the countryside to the south and took a photo of a tower on a hillside. 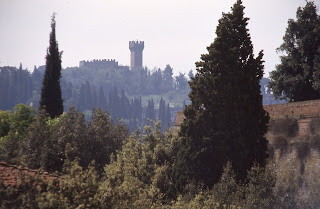 At first, looking at the photo thirty years later, it seemed forgettable. However, two interpretations now have captured my retroactive attention.

First and most recently, in the spring of 2016 I read a medieval novel called The Decameron.

Written by 14th-century Italian author Giovanni Boccaccio, The Decameron is a collection of 100 stories told over a period of days by seven young women and three young men, who have fled as a group from plague-ridden Florence for an extended holiday in the verdant hills nearby.

What an addled modern brain might imagine happening doesn’t, and there are no sexual relations between these friends. Rather, it's the stories themselves that often are ribald. If you believe that Renaissance writers have nothing to say about sex, and in particular, no insights about diverse female perspectives, it’s time for a reappraisal. 650 years on, the naturalness and candor of these vignettes are astonishing.

Now there's an image to accompany the novel.

Second, going much further backward in time, one of my earliest memories is looking at a children's history book and being fascinated by a cheesy illustration of a medieval knight atop a tower, looking out at the world beyond. I can still see the drawing 50 years later.

Perhaps in this photo, I'm looking back at the knight.

From my Piazzale Michelangelo vantage point, the Duomo and Palazzo Vecchio. 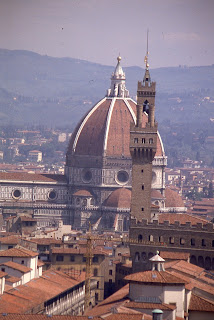 I was still very much in the city, though you could barely tell from this view. 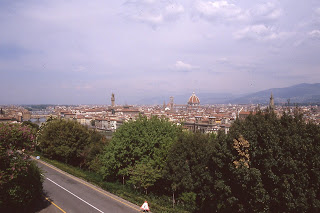 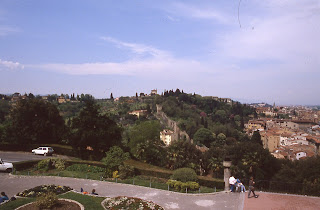 Finally, the Ponte Vecchio, with the Ponte Santa Trinita next, behind it. 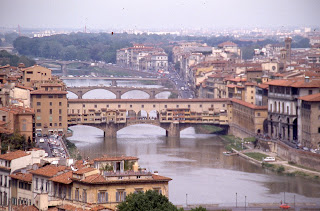 At this juncture, it's worth remembering the 1966 flood in Florence.


What followed – the great flood of Florence – would be remembered for decades as the worst natural disaster to lay siege to the city at the heart of the Renaissance. Dozens of lives were lost, great works of art destroyed or nearly destroyed, and a million books in the city’s low-lying Biblioteca Nazionale were submerged.


By late afternoon I'd crossed the non-flooded Arno and found the Basilica of Santa Croce.

The Basilica of Santa Croce in Florence, Italy is much more than just a church. Santa Croce is one of the oldest and largest Franciscan basilicas in the world and by far the most magnificent. Some of history’s most influential artists have made their mark on the church, from frescoes by Giotto and Agnolo Gaddi, to architecture by Brunelleschi and Donatello. While many basilicas in Italy contain the works of great artists, Santa Croce is unlike any other in the fact that it contains more than just their art; it contains their remains as well. Dubbed “The Temple of the Italian Glories,” Santa Croce contains more skeletons of Renaissance masters than any other church in Italy. 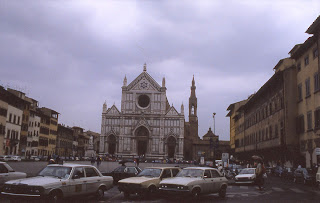 As you can see, the rain had returned. I was headed south, and wouldn't see rain again until Yugoslavia. There remains a final answered question about Florence. Did I visit the Uffizi Gallery?

I don't think so. Maybe. I can't say one way or another, but if it happened, I'm sure it was epic. At least there was one fine meal with English Paul and the Texans.