Croissants d'BBQ Bologna: Dan Coffey says that restaurants are taking up the sidewalk and his compatriots damn well better do something about it. 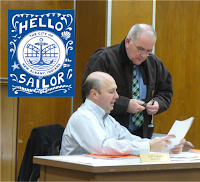 There will be a city council meeting tonight. If I can remain sober today, I might attend it.

But first, at the July 20 city council meeting, the king of barbecued bologna -- the Wizard of Westendia, and the Shunner of Tulip Tiptoeing -- indulged his penchant for diversionary innuendo. 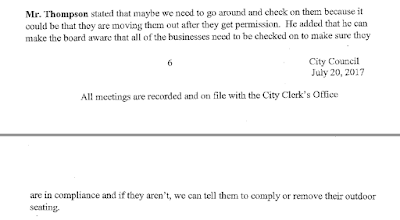 Coffey's germ of truth is irrefutable, because disabled users really do face myriad daily challenges attempting to navigate the city of New Albany's sidewalks and streets.

But making this point by attacking the city's food and dining community, which has done more than any other economic sector to make downtown habitable again, misses the larger truth by a Birdseye mile.

As we've pointed out numerous times before, city government itself has no mission statement or internal policy pertaining to prioritization of mobility, and City Hall needs to begin by policing itself in this regard.

The vast majority of abuses occur at the hands of the city's chosen contractors, indifferent utility monopoly slackers, and unfortunately the city's own Street Department. Neither Jeff Gahan nor the Board of Public Works and Safety has made an effort to embrace modernity.

To repeat: it's merely procedural.

The city must develop good habits, and to develop them, the city must acknowledge it has a problem. A good start would be reading the bimonthly council agenda. At the bottom, there is a promise of assistance from the city clerk to disabled council meeting attendees who are in need of it.

Shouldn't the city's own workers, contractors and utility monopolies adhere to the same promise?

It starts with BoW's rote interrogations. Instead of this:

"How will (a proposal) affect parking/traffic/cars?"

The board first should ask this:

"How will (a proposal) affect handicapped users without cars?"

Infrastructure decisions routinely are rendered in the absence of forethought as to their effect on persons with disabilities. These tiny bits of effort will have little if any ultimate effect on the Holy Writ of Autocentrism, as worshipped by City Hall. However, these instances will immeasurably assist the disabled in getting back and forth.

Consequently, it is laughable for Coffey to continue pointing his dull reaper's finger at downtown business violators when there are far larger fish to fry. Furthermore, it's a safe bet that these scattered and inconsequential instances of eatery transgression are occurring not in Coffey's 1st district, but Greg Phipps' 3rd, which embraces the epicenter of downtown east of State Street.

And so we've learned to ask the question: What's Coffey after this time? I guess we'll find out after Adam Dickey hands the envelope du jour to Coffey on a gilded Democratic Party platter.

Tonight's agenda follows. After writing the preceding spiel, that half-full bottle of gin over in the corner is starting to look very much like lunch. 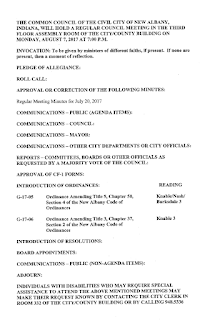