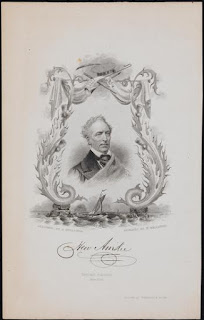 The sketch was first published in the FOSSILS newsletter circa 1994. Later it was a staple on the club's web site, and was reprinted at Potable Curmudgeon in 2005 and NA Confidential in 2012.

Many thanks to Conrad, whose tireless research into Louisville area brewing can be experienced in Louisville Breweries, co-written with Peter Guetig, and originally published in 1997. There was only one printing, but a few copies still are floating around. Just a few years ago, Peter was said to be preparing a revised edition, but I don't know if it was ever completed. If you have the information, please update me.

Many early brewers worked their trade as a sideline or temporary trade before moving on to other occupations. Hew Ainslie is unique for having been principally a poet.

He was born at Bargany in Ayrshire, Scotland on April 5, 1792. Hew was the only son of George Ainslie, an employee on the estate of Sir Hew Dalrymple Hamilton. He was educated in the parish school at Ballantrae, and later at the academy at Ayr. In 1809 his family moved to Roslin, about six miles from Edinburgh. He married his cousin Janet Ainslie in 1812, whose brother Jock had married Hew's sister Eleanora.

Ainslie studied law in Glasgow, and worked as a clerk in the Register House in Edinburgh. In 1820 he revisited Ayrshire on foot with James Wellstood and John Gibson and in the next two years wrote A Pilgrimage to the Land of Burns, which was published in London in 1822. The book was an account of their travels and visits with some of Robert Burns's contemporaries, with songs and ballads by Ainslie that were much in the style of Burns, and illustrations by Wellstood.

In July, 1822, Ainslie sailed from Liverpool to New York with his friend Wellstood. Mrs. Ainslie and their three children joined him in the following year. Ainslie and Wellstood purchased Pilgrim's Repose, a farm at Hoosac Falls in Rensselaer County, New York. Ainslie and his family lived there for almost three years before joining Robert Owen's utopian socialist cooperative community at New Harmony, Indiana in 1825.

When Owen's community failed about a year later they moved first to Cincinnati, where Ainslie became a partner with Price and (Thomas) Wood in a brewery, then to Louisville. In Louisville, a town of 7,000, Ainslie opened a brewery in 1829 at 7th Street between Water and Main. Records show that B. Foster, Enoch Wenzell and Robert McKenzie worked there.

In February, 1832 there was a major flood of the Ohio River, with the river's waters rising to 46 feet above the low water level. A contemporary account of the "calamity" reads:

This was an unparalleled flood in the Ohio. It commenced on the 10th of February and continued until the 21st of that month, having risen to (an) extraordinary height ... above low-water mark. The destruction of property by this flood was immense. Nearly all the frame buildings near the river were either floated off or turned over and destroyed. An almost total cessation in business was the necessary consequence; even farmers from the neighborhood were unable to get to the markets, the flood having so affected the smaller streams as to render them impassable. The description of the sufferings by this flood is appalling ...


Ainslie's brewery was swept away with most of the neighborhood, but in the following years he remained in the beer business, working at the Nuttall brewery on the west side of 6th Street between Water and Main.

In 1840 he opened the first brewery in New Albany, the partnership of Bottomley & Ainslie. Soon that business was destroyed by fire. In the 1841 Louisville City Directory, Hew Ainslie is listed as a maltster; it was his last listing in the brewing trade. Discouraged by fire and flood, he gave up the brewing business altogether. Thereafter, his working life became somewhat intertwined with that of his children, particularly George and James Wellstood Ainslie.

Hew and Janet Ainslie had ten children, seven of them surviving to adulthood. George Ainslie, the eldest Ainslie son, had been apprenticed to Lachan McDougall around 1830 to learn the iron foundry and moulding trade, and he had acquired a solid business and technical education. He became a foreman at John Curry's foundry and married Mary Thirlwell, daughter of Charles Thirlwell, who was a brewer at the Nuttall Brewery (Hew Ainslie's one-time employer).

Thirlwell eventually acquired Nuttall and operated it until 1856. In 1842, George Ainslie became a partner in Gowan and McGhee's Boone Foundry. By 1845 Hew Ainslie -- still a poet throughout -- was employed as a finisher there as well as working as a contractor and in the building trades.

George and James Ainslie became highly successful in the foundry and machine business, enabling their father to devote more time to writing in later life. In 1853, Hew Ainslie made a long visit to New Jersey to visit members of the family of James Wellstood, undoubtedly providing the poet with a nostalgic link to the Scotland of his youth.

In 1855 a collection of Ainslie's verse, Scottish Songs, Ballads and Poetry, was published in New York. One latter-day commentator called Ainslie's songs of the sea "the best that Scotland has produced," and perhaps this assessment was borne out by the reception accorded Ainslie in Scottish literary circles in 1863, when he returned to Scotland for a final visit.

Janet Ainslie died in 1863 prior to Hew's last Scottish journey. In 1868 the elderly poet/brewer went to live with his son George in a new home on Chestnut Street (between 9th and 10th) in Louisville, where he spent the last decade of his life and was a familiar sight as he passed time tending the garden there. Ainslie died on March 6, 1878, and was eulogized in the Courier-Journal as "a poet of considerable merit to the people of his native land." Hew and Janet Ainslie are buried in Cave Hill Cemetery.

In addition to the many accomplishments noted previously, Ainslie is remembered for his height -- at 6 feet, 4 inches, he referred to himself in his works as "The Lang Linker" -- and for never losing his Scottish accent during almost six decades in America.

There is no specific information to be found as to the products of the breweries with which Hew Ainslie was involved in Louisville and New Albany, but we can surmise from the available evidence that they were typical small breweries of the time, with four or five employees, making ale, porter and stout. As a man who appreciated truth and beauty, it is likely that Hew Ainslie made good malt, and being conscientious with it, good beer as well.

The following poems by Hew Ainslie are copied from the Filson Historical Society's extremely rare copy of A Pilgrimage to the Land of Burns and Poetry, Ainslie's 1822 work combined with later efforts and reprinted in 1892, the centenary of his birth.

(Author's note: I have heard a scrap or two of Robert Burns, and expect these are much better read aloud in Scots dialect.)

THE DAFT DAYS.
The midnight hour is clinking, lads,
An' the douce an' the decent are winking, lads;
Sae I tell ye again,
Be't weel or ill ta'en,
It's time ye were quatting your drinking, lads.
Gae ben, 'an mind your gauntry, Kate,
Gi'es mair o' your beer, an' less bantry, Kate,
For we vow, whaur we sit,
That afore we shall flit,
We'se be better acquaint wi' your pantry, Kate.
The "daft days" are but beginning, Kate,
An we're sworn. Would you hae us a sinning, Kate?
By our faith an' our houp,
We will stick by the stoup
As lang as the barrel keeps rinning, Kate.
Thro' hay, an' thro' hairst, sair we toil it, Kate,
Thro' Simmer, an' Winter, we moil it, Kate;
Sae ye ken, whan the wheel
Is beginning to squeal,
It's time for to grease an' to oil it, Kate.
Sae draw us anither drappy, Kate,
An' gie us a cake to our cappy, Kate;
For, by spiggot an' pin!
It's waur than a sin
To flit when we're sitting sae happy, Kate.

LET'S DRINK TO OUR NEXT MEETING.
Let's drink to our next meeting, lads,
Nor think on what's atwixt;
They're fools wha spoil the present hour
By thinking on the next.
Then here's to Meg o' Morningside,
An Kate o' Kittlemark;
The taen she drank her hose and shoon,
The tither pawned her sark.
A load o' wealth, an' wardly pelf,
They say is sair to bear;
Sae he's a gowk would scrape an' howk
To make his burden mair

THE HOOSIER .
We lads that live up in the nobs,
Tho' our manners might yet bear a rubbing,
We're handy at neat little jobs
Such as chopping and hewing and grubbing.
Tho' we roost in a cabin of logs,
And clapboards lie 'twixt us and heaven,
Our mast makes us fine oily hogs,
And from hoop-poles we pick a good living.
Right quiet -- to a decent degree --
it's seldom we guzzle it deep, Sir,
Tho' we don't mind a bit of a spree,
Provided the liquor is cheap, Sir.
Our neighbours, that live 'cross the drink.
May laugh at our fondness for cider,
But so long as we pocket their clink
They may laugh till their mouths they grow wider.
Our gals make our trousers, you see,
From that beautiful stuff called tow linen,
and in coats of the linsey -- dang me,
If we don't look both handsome and winning.
Our wives are our weavers, to boot;
Ourselves are first rate on a shoe, Sir;
We can doctor a tub with a hoop --
And hark ! we're our own ni__ers* too, Sir,
So here's to our Hoosier land,
The sons of its soil and its waters !
May the "nullies" ne'er get it in hand,
Nor demagogues tear it in tatters.
But still may it flourish and push,
Thro' vetos and all such tough cases,
Till railroads are common as brush,
And the nobs are as sleek as your faces.

*To provide context to Ainslie's use of the "N" word, "The Hoosier" was intended as an anti-nullification poem -- a direct slap at the slave-owning caste south of the Ohio River, and a self-mocking espousal of the poor but free residents to the north. If any reader can shed further light on the history involved, please do so.
Posted by The New Albanian at 8/23/2017 03:07:00 PM