THE BEER BEAT: YAY (effing) YAY -- my friend Patti and her pal Cindy get some serious ink, and I'm not talking tattoos. 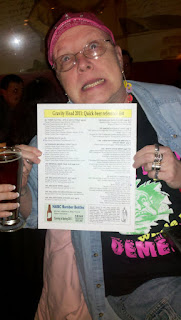 Between the photo and the article, everything should be quite clear. Patti and Larry and their friends from Dayton (including Cindy) began coming down for Gravity Head so long ago that I can't remember exactly when, though perhaps the second or third edition.

Here you go, Patti -- your fifteen minutes of beer fame, although honestly, it's fifteen years. You've been a rock star all along.

As the line was starting to form outside Jackie O's for their calendar page bottle release, I stopped in the pub to grab an early lunch. The place was busy and starting to fill up, no doubt with folks that were eager to get back outside and into the line themselves.

A few minutes after I was seated, the four-top next to me turned over. The first thing I noticed about the new quartet was the woman's hat, catty-corner to me: a vibrant pink cap with a large, bedazzled flamingo pinned to the front. The second thing I noticed was how picky she was about her beer.

Filling out a flight card, she thought out loud as she moved down the draft list. Most choices were eliminated with a curt, "Had that!" or, "Nah!" the latter meaning it didn't fit in with the flavors she was curating. To be clear, every beer on the list that day was rare, and fairly phenomenal. When she finally penciled in the last slot, she held the card afar as if to admire her work.

After the server walked away, I leaned over and asked with a wink, "Are you hanging around for the calendar pages?" Patti didn't skip a beat and replied, "Fuck yeah."