No victory laps -- yet. Reverting NA's downtown street grid to two-way traffic is just the beginning. 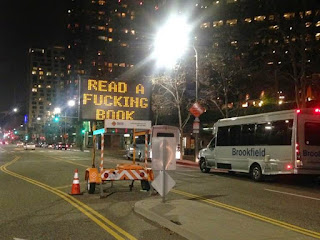 Previously: Grid Control, Vol. 23: City's fuddy-duddies losing their minds as the debut for a two-way Spring Street is pegged at August 29.

No victory laps ... so much to do ... but kindly allow a rant of sorts, as posted this morning at Fb.

Lots of us have spent the better part of 15 years mustering abundant evidence in favor of reverting one-way streets to two-way traffic. We've cited stats and studies, and pointed to positive experiences in America and across the planet.

Time and again, we've asked opponents to show us some tangible proof for the impending catastrophe of two-way streets, and have listened as the crickets chirp in response.

Yes, you're entitled to your own opinion, though not your own facts -- and to be perfectly honest, after a decade and a half, we're bored to effing tears with your opinions.

We've done OUR jobs, and miracle of miracles, the city has produced a plan in response. It doesn't go far enough toward the ideal of pistol-whipping auto-centrism, but it's the end of the beginning, and humans (as opposed to their vehicles) have nudged back into the picture.

If two-way streets are "turning back the clock," as some suggest, then at long last I can say: "Give me that old time religion."

Just remember that if you hate two-way streets, blame the mayor and vote against him -- and if you love them, thank the grassroots activists who kept pushing in the face of NA ruling caste incomprehension. There is much work yet to be done, but this time I hope it doesn't take 15 years.

Following is an excerpt from ON THE AVENUES: Yellow lines and what comes due (September 19, 2013).

Dear New Albany politicians in the executive and legislative branches of government,

Hi. You know this whole two-way street conversion thing we’ve been talking about since the House of Bread was still open? Well, here’s the way it needs to work.

That’s right: You owe us.

In fact, it’s all quite easy to understand, so let me help you out.

Just take every one of those “no-brainer,” “quality of life,” and “economic development” arguments made by those in favor of $20 million worth of new city parks, and grasp that these exact same arguments apply just as strongly to two-way streets, traffic calming and complete streets – at least insofar as the new cadre of independent business owners are concerned.

We’re the ones who actually have been investing downtown.

Then add the needs and interests of present and future inhabitants in those neighborhoods making up the city’s historic core. They’re not feeling arterial – no, not at all.

While you’re at it, take the case for Main Street’s makeover (you can keep the excessive expense, but that’s another story), and understand that the Main Street rationale (i.e., we all need nice things) applies to Elm, Market and Spring Streets, too – as much, and probably more so, because unlike Main Street, those other neighborhoods still hang in the balance. The NSP was nice … but it was mostly federal stimulus money, wasn’t it?

You see, you owe us a modern street grid, because so far, most of the heavy lifting in the historic core has been on someone else’s dime, whether from local investors, state highway pay-outs or Obama funds.

Now, with this much needed two-way street conversion and other related measures to enhance New Albany’s prospects, it’s time at last for you to go all in and show us that you really get it, and that River Ridge envy shall not be the dominant economic development motif hereabouts.

Just remember: You owe us.

Pay us all back, all at once. Give us a street grid that facilitates revitalization, not one that actively hampers it.

Hell, if you buy the paint, we might even roll a few kegs out some afternoon and paint the stripes for you.

If you decline to act – well, we might just paint the stripes ourselves, anyway. A little civil disobedience never harmed anyone.

Thank you for your attention to this matter. We're watching.