ASK THE BORED: You can't always get tree stumps zapped when you want, but if you're a V.I.P. -- well, you get what you need.

As we enter Year Six of the Chronicles of Gallant New Gahania, the perennially moribund Tree Board is showing a faint glimmer of life despite Adam Dickey's presence in a seat.

(see the bibliography at article's end)

As you read Elizabeth Beilman's February 9 newspaper coverage, bear in mind that even as Jeff Gahan's "parks and recreation" fetish -- which always was more about power than production -- has occupied a disproportionate place in his agenda, hundreds of trees outside the boundaries of his suburban-flavored parks have fallen. Some were dead, others living.

A huge number were brought down for the noble cause of making a Greenway auto-friendly.

During a time of enhanced urban heat island effect, and as the mayor plays his oblivious daily shell game about "walk-ability," which can be translated as "drive-ability," seeing as he hasn't once grasped what it really means, these (shade) trees generally have not been replanted until the cost can be shifted elsewhere, as with grandiose street reconstruction projects financed by the federal government.

NEW ALBANY — The New Albany Tree Board is preparing to take on a larger presence in the community, and it will start by taking stock of city trees.

A $20,000 federal grant from the Indiana Department of Natural Resources will allow the tree board to conduct an inventory of trees planted on city property and then create an urban tree management plan.

"We want to take on a bigger role, because we are losing trees at a fast rate, and we want to make sure that we plant more than we're losing," tree board member and New Albany City Councilman David Barksdale said.

Once the city has a management plan, it will be eligible to receive more grants to buy trees.

"The average person is not going to see this management plan," arborist and tree board adviser Greg Mills said. " ... What you're going to see is the trees that get planted later as a result."


In essence, kudos to anyone who gives a damn, because the upper echelons of Team Gahan clearly do not, and probably won't respond to any tree-related issues -- unless, of course, you're an insider.

Last May, I attended a Tree Board meeting, intent on gathering information (stop me if you've heard THIS one before) which does not exist on-line. By the way, I've never gotten the info -- and curiously, Bob Caesar isn't even on the Tree Board.

Whatever work the Tree Board does with respect to cutting, planting and maintaining trees on publicly owned lands and right-of-way is at the behest of the Board of Works, which is given marching orders by the mayor. Shocking, isn't it?

The Tree Board is lamentably understaffed and mostly non-funded. Currently it is short a board member, and to hurriedly arrive at a conclusion for this extremely depressing digression, it comes down to Oz's Whim.

In short, Team Gahan decides whether a tree stays or goes, irrespective of whether the tree is healthy or dying, and quite apart from extraneous considerations of aesthetics, storm water abatement or Urban Heat Islands.

I’ve no reason to believe the Tree Board isn’t well-meaning, or doesn’t try its best. I'm satisfied it does what it can -- and what it can do is highly circumscribed.


Judge Terry Cody also was there at the May meeting. Because there was no quorum, nothing official was decided, but an informal discussion occurred as to Cody's desire to have the trees by his Green House removed. Apparently there was an issue with roots. Heads nodded. The plan was already in its secure pipeline.

As I awaited requested information that never arrived, by November the first three of Cody's city street trees disappeared from the 3rd Street side. 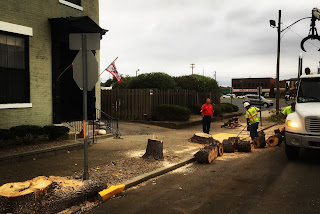 Two months later, the stumps were gone and the sidewalk had been poured without cutouts for replanting. Three down, none to come. 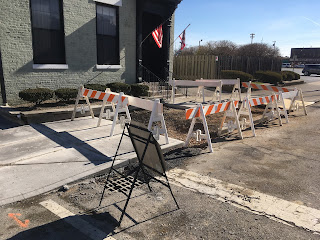 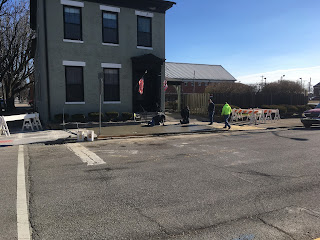 Contrast this level of prompt, efficient service with the half-block of Spring between my house and 11th Street, where there exist eight stumps of indeterminate vintage (dead trees taken down within the last six or seven years), and perhaps two living replacements. 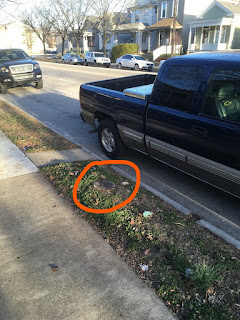 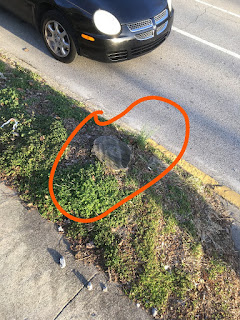 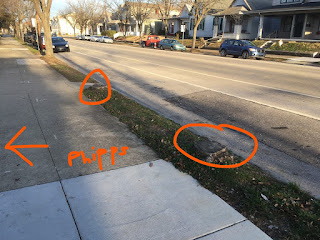 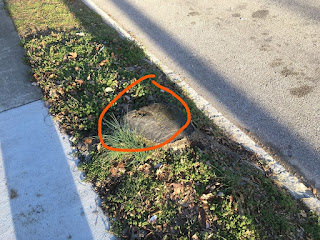 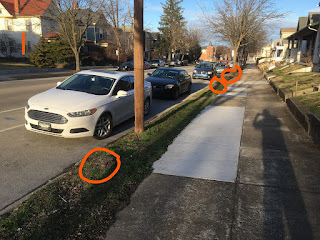 Ironically, my council representative lives as I do within spitting distance of these stumps, but apparently they've escaped his scrutiny. Naturally, this is a scene repeated up and down Spring Street, throughout Greg Phipps' district. Those pesky details.

It's understood that they planted the wrong trees, perhaps because someone could make a few quid off his brother-in-law's nursery business.

That's right; a monoculture was created, and it's expensive to reverse the process, especially when the mayor insists on funding golden statues of himself rather than eco-friendly aids to urban existence.

We even understand that it's the way of the world when someone like Cody receives preferential treatment -- not so much owing to his position or family history, but as a member of an endangered species, the Floyd County Democratic Party.

Couldn't the city at least remove the effing stumps after a year or two or eight?

I'm told that the city doesn't even own a stump grinder. It rents one when needed. You'd think there'd be chump change left over from the $19 million "green space" TIF bond expenditure for minor considerations like this.

A SELECTION OF PREVIOUS ARTICLES

Unheard of in New Albany: "Going forward, I will be more sensitive to the spectrum of concerns regarding trees."


At least this time Pinocchio felled his OWN tree.


"Eventually there'll be a plan to replant" the clear-cut tree cover, but of course no one can say what or when that might be.


Politics, good judgment, social media, and why I refrained from voting in the Floyd Circuit Judge race.


2016 council budget hearing: Money for the Tree Board to cut trees, or plant them?


Placing a dollar value on the services that street trees perform.


Unlike New Albany, "The people of Somerville, Massachusetts really, really care about trees."


New Albany's Tree Board -- statute, staff and board members.


Whatever happened to the Tree Board, anyway?