Mt. Tabor Road euphemism project: If City Hall looks bad, that's only because it's doing the damage to itself. 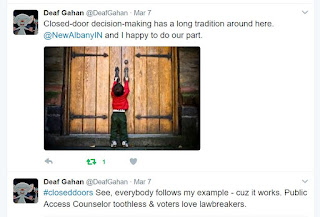 Colin Receveur is to be commended for pursuing every legal mechanism in an effort to compel Team Gahan to practice transparency.

It isn't just that those federal 80/20 construction grants are like crack. It's that to Team Gahan, openness is like Ebola.

'Bune snoozes and IL gets the scoop: "City of New Albany, residents head to court over road improvement project."

The Indiana Public Access Counselor has affirmed that the city of New Albany has unlawfully denied public records to a landowner who is pushing back against the city’s use of eminent domain in a Mount Tabor Road expansion project.


"We've also reached out to the city of New Albany and have yet to hear a response."

People who own property on Mt. Tabor Road in New Albany are concerned about planned construction that will change the size of the road.