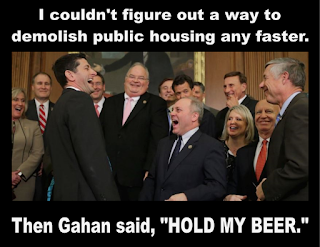 When Donald Trump and his gasbag minions dispense massive and flabbergasting lies, Democrats get hot and bothered -- and then they look the other way when the same phenomenon occurs among their own.

On the impending Gahanization of public housing:

“Since 1937, the city of New Albany has done their fair share. We’re leading. I think there’s no question that some other communities need to up their game.”
-- Jeff Gahan

On what happens if housing voucher holders can’t find spaces in New Albany once turned away from existing public housing:

“I think we’re happy that they would go and find any place — if it’s in the city, great, if it’s outside the city that makes them happy and gives them a quality of life that they’re looking for, I think that’s the whole concern.”
-- David Duggins

Our agoraphobic mayor, who seldom emerges from the safety of the command bunker, agreed to an interview with the News and Tribune's Elizabeth Beilman.

PARADIGM SHIFT IN PUBLIC HOUSING: New Albany aims for significant changes of public housing stock over next decade; Plan calls for reduction by half of units

NEW ALBANY — A 10-year public housing plan that would result in demolition of more than half of New Albany’s stock has local advocates concerned that low income residents will struggle to find alternative housing ... the plan, which goes up for a board vote next Monday, calls for the demolition of Parkview Tower, Parkview Terrace/Broadmeade, Vance Courts and Riverside Terrace. That’s a total of 635 of New Albany’s roughly 1,100 units, or currently almost 1,500 people. These units would not be rebuilt.

ON THE AVENUES: A luxury-obsessed Jeff Gahan has packed a board and now seeks to break the New Albany Housing Authority. Can we impeach him yet?

Gahan might be fooling you, but not me. What’s going down with the NAHA is a travesty of social justice, and even if you’re okay with the idea of eliminating affordable public housing, be aware that the mayor’s methodology is hardly less malevolent than Trump’s.

When Gahan comes for the residents of these houses, for the sole reason that there are more profitable uses for their homes, will anyone be there to do something?

Is this really what democracy is about?

So very many questions, and as always, so very little time to find answers for them ... and not a single City Hall functionary who'll even pretend to try apart from rote, boilerplate bromides to the press.

So, what's the plan for building scattered site affordable housing units? Silver Hills needs to be a part of this diaspora, doesn't it?

Isn't it working at cross purposes to be using TIF and other incentivization mechanisms to promote gentrification, when doing so reduces the amount of potential affordable housing for the working poor?

And what about projected uses for public housing sites slated for demolition? Won't the Riverside Terrace property be given over to more "luxury" owing to its Ohio River Greenway and Loop Island proximity?

Do we have enough Section 8-worthy rental properties to absorb the evicted? Conversely, shouldn't we be inspecting rentals and not merely registering them?

Finally, what's the experience in other cities seeking to substitute Section 8 vouchers for bricks 'n' mortar?

Fairly dismal, it would seem, although not every city has as luminous presence as economic dishevelment director Duggins to gleefully pack the cattle cars.

In Defense of Public Housing, by Karen Narefsky (Jacobin)

Imagine a future in which many of us live in, and thrive in, quality public housing.

... In line with this shift toward private ownership of subsidized housing, US public housing authorities have become increasingly reliant on Housing Choice Vouchers, or Section 8. While possession of a mobile Section 8 voucher guarantees subsidized rent, the units where the voucher can be used are privately owned.

This allows landlords to discriminate against tenants, whether through outright exclusion or by charging rents that exceed HUD’s fair market cap. Section 8 tenants can easily be forced out by property value increases and rising rents, one facet of the cycle of gentrification and displacement currently affecting many US cities.

In a process partially justified by these many challenges, public housing is currently either being killed by neglect or aggressively privatized ...


Indeed, Deaf Gahan is doing his part. Because what's permitted is promoted, this pogrom is being facilitated by hypocritical pretend-Democrats, and if you're one of them, time to stop looking away. In fact, it's time for a good, hard look in the mirror.

Duggins needs to go. After apologizing for that outrageous quote/millstone around the administration's neck.