A book and a travel story about the eastern German island of Hiddensee. 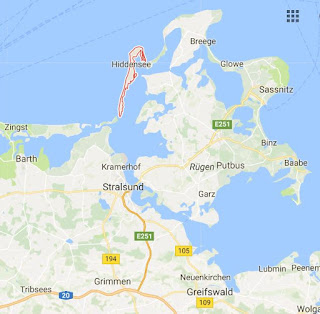 In 1991, I set out from Vienna on a late summer's meander, first to the west and my first-ever experience of Bamberg, then north, and finally in the southerly direction of Czechoslovakia, where in September I was slated to begin a temporary job teaching English in the city of Košice, far off to the east near what's now Ukraine.

Without going downstairs to find the records from this journey, it isn't clear to me exactly where I went and when, but it's clear that at some point, I washed up in the Baltic port city of Greifswald, Germany to visit my friend Suzanne.

Just two years before this, Greifswald was in East Germany. I'd gotten to know Suzanne during my time in East Berlin, working for three weeks alongside the Free German Youth brigades, and residing on a bunk in a Warsaw Pact-surplus tent camp in a threadbare forest near the Planterwald S-Bahn station (links to the four-part telling of this story can be found here).

If memory serves, by 1991 Suzanne was doing graduate work at the university in Greifswald. I've no idea how we arranged to meet in this primitive pre-cellular era. Perhaps I sent a actual letter (?) or phoned from a friend's land line in Copenhagen. At any event, once there it was amazing to witness the transition underway. Some day I'll get around to writing more about it.

One item on the agenda was to go to the island of Hiddensee. To do required catching a train to Stralsund, and then a ferry to the island itself. The university dorms were a good 20-minute hike from the train station, maybe more, and we had to rise early to achieve the schedule. This wouldn't have mattered, except that we'd walked only a hundred yards when the skies opened up.

The streets were deserted, and there was no way to hail a taxi. We kept walking, and arrived at the train station completely soaked on a very cool morning. I can recall hanging my jacket on the hook in the rail compartment and watching the water drip from it.

Inundated and miserable, we boarded the ferry for Hiddensee. As the boat docked, the sun came out and the day turned comfortably warm. The wind from the sea was stiff as we began walking through the narrow island's village, and into the fields and sand dunes. Within minutes (or so it seemed), we were bone dry, only to be badly burned by the wind and sun by the time the ferry returned.

I'm sure it made the beers in Greifswald taste even better. By the way, I fully intend to read this book.

Dreams and dreamers: The myths associated with the island of Hiddensee (The Economist)

WITH its thin body and chunky head (“the seahorse with the sledgehammer muzzle”), the German island of Hiddensee faces northwest across the Baltic Sea towards the coast of Denmark. Part of East Germany during the cold war, Hiddensee became an “island of the blessed”: an enclave of freethinkers where dreamers and idealists sought to escape the oppressive conformity of state socialism. Crucially, in “Kruso”, an outstanding debut novel by Lutz Seiler which won the 2014 German Book prize, it became home to refugees—swimmers, or sailors in makeshift craft—who tried to flee the GDR. Many drowned. Most were intercepted; but hundreds succeeded.