2 of 2: Newspaper editorial board displays abject cluelessness about the Great Gahan Public Housing Putsch of 2017. 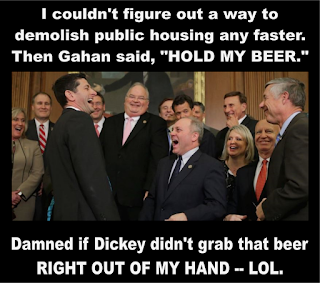 Nick Vaughn's take is sensible, and we need it, because the newspaper's editorial board is clueless -- and their writing is as bad as ever.

"Most would agree with that statement."

Criteria? Most? Based on what? Reality, or fake facts?

Or must we accept Chris Morris's viewpoint as gospel, given that at least he lives in New Albany, whereas the remainder of the Jeffersonville-centric editorial board knows absolutely nothing about our city, and as time goes on, grows ever prouder of this fact?

Because: Whatever other merits the editorial might possess, beginning it with an unproven, apocryphal hearsay "fact" sans evidence and proof negates all of them.

OUR OPINION: Housing plan should be people-focused

There are too many public housing units in New Albany.

Most would agree with that statement. New Albany has the third-highest number of public housing units in the state of Indiana. Pretty incredible considering the size of Floyd County.

On Monday, the New Albany Housing Authority board will consider a plan, brought forth by Mayor Jeff Gahan’s administration, to tear down an estimated 635 of New Albany’s 1,100 units. Those units affected would include Parkview Tower, Parkview Terrace/Broadmeade, Vance Court and Riverside Terrace.

It would be a drastic change to the city’s landscape. It would also force those displaced to find new housing.

That is where the challenge lies.