Discussions here at the blog started over the weekend.

It looks like the demolition of the old Tommy Lancaster's on Market is underway. Presumably, Gahanesque luxury is on the horizon.


The fever for Redevelopment Commission demolition: Lancaster's is coming down, Market Boy is next and incentives are sure to follow.

Verily, Gahan's still "not finished yet," but exactly what do you bequeath a city when you've already tiffed it a luxury indoor astroturf-clad recreation center, a luxury water slide, a luxury apartment complex and a luxury dog grooming park? 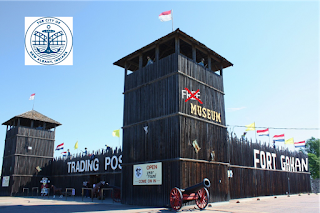 The Green Mouse has learned that the mayor plans to fill the space between Market, Vincennes and King Streets with a tourist attraction called Fort Gahan.

As a replica of the Colonial-era trading post built by the pioneering Gahan family, who since January 1, 2012 have officially predated the arrival to New Albany of those upstart poseur Scribners, Fort Gahan will feature an interactive museum dedicated to the city's founding Mac Eacháin family (their name later was shortened to "Jeff"), complete with a trendy eatery priced to suit the beautiful people; children's games like pin-the-tail-on-the-progressive, and a streamlined 24-hour campaign finance portal.

But first, down with those nasty buildings. Take it away, Mike; after all, we know you really said it, not him.

Demolition to Begin Next Week

Revitalization set to begin at Vincennes and East Market Streets. The New Albany Redevelopment Commission obtained possession of the old Tommy Lancaster’s Restaurant and Market Boy Convenient Store. Both structures, over years of neglect, have become eyesores and blight in the area. Tommy Lancaster’s Restaurant once served thousands of customers over several decades. However, the restaurant closed in 2011 and has been vacant and deteriorating since its closing. Market Boy, which sits adjacent to Tommy’s, has not seen any improvements for years and too has become a blight and eyesore for the area.

Both properties, Tommy’s and Market Boy, are set to be razed in the coming week. The properties were evaluated and determined to be unsalvageable. Upon demolition, the Redevelopment Commission will begin the process of revitalization by putting the properties together in a Request for Proposal to spur economic development in that area and along the Vincennes corridor.

“Tommy’s and Market Boy are two establishments that have served our community well over the years,” stated Mayor Jeff Gahan, “but it is exciting to facilitate and make way for brand new development here in New Albany.”