It's more delicious to avoid those "complicated feelings" about eating horse meat. 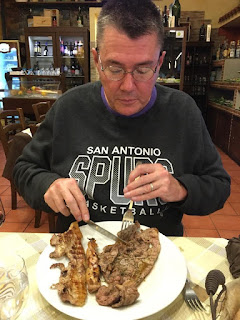 I'm already saddened that we traveled all the way to Sicily four months ago and Mt. Etna didn't get the "Roger's here" memo and erupt, instead waiting until the past week to toss out some pyrotechnics.


Now comes a reminder that one of the fundamental joys of cuisine in Catania not only remains taboo back here in Trumpicana, but in fact has been banned by papal decree since the year 732.

Except the Pope lives in Rome, and Rome is in Italy, and so is Catania ... so never mind. Italians ignore the Vatican's birth control edicts, too.

I'll always remember my mixed equine grill (above) at La Terrazza del Barone. It was delightful, and I'd like to go back to Catania for horse burgers some day, perhaps with horseradish.

Actually, I'd just like to return to Catania, horse or no horse.

Why We Have Such Complicated Feelings About Eating Horses, by Eric Grundhauser (Atlas Obscura)

In many cuisines — Chinese, French, French Canadian, Kazakh — eating horse is no big deal, and sometimes even considered a delicacy. But in the U.S., the U.K., and much of the modern English-speaking world, the idea of horses as food is considered a big no-no, even among avid meat eaters.

The practice of eating horses goes back to the time of early man, with evidence of horse consumption dating back to the Paleolithic era. But using horses as food has long presented both practical and emotional quandaries. Almost universally, horses have long been seen as companions and beasts of burden. “It’s an animal we anthropomorphize, but it also comes from this tradition of herbivores that we feel more comfortable eating,” says Amy Bentley, a Food Studies professor at New York University, who has never tried horse meat herself. “So, I’m sure that makes it more flexible in that way.”


However, there's this little matter of logic.

The cultural development surrounding the production and eating of horse meat differs from country to country, but for the most part, it has been eaten out of necessity. “Here’s this huge animal with hundreds of pounds of meat on it,” says Bentley. “If you’re going to eat animals, it’s a pretty logical animal to eat.”