THE BEER BEAT: An assortment of headlines for beer and dissection. 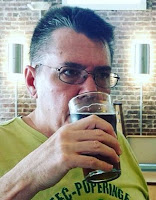 The photo at left shows me drinking a yummy smoked amber ale at Bloomington's Function Brewing. It was the culmination of an instructive day spent wandering the town and sampling a great many beers along the way:

About an excellent brewery crawl in Bloomington, Indiana (March 30, 2016).

Every year it's the same, and we feel it again.

... Lawmakers can do quite a few things to introduce sobriety to the state’s alcohol scheme. Repeal the liquor store commodity restriction and let them sell whatever they want, just as in grocery and big box stores. Let minors enter a liquor store as long as they are accompanied by a parent or guardian. Require anyone working in grocery or big box store who handles liquor to be trained and licensed to ring up alcohol. Allow all retailers to sell cold beer. And get rid of the prohibition on Sunday sales.


Every year is the same, and I repeat once again: SUNDAY SALES ALREADY EXIST. Each year without fail, someone writes a column like this one lamenting Indiana's undisputed legal weirdness, and it always ends with the broad claim that there is a prohibition on Sunday sales.

But beer, wine and spirits are available for carry-out on Sunday from small Indiana's brewers, vintners and distillers -- and there are virtually no restrictions pertaining to on-premise consumption.

Editors of the world, do you exist? Are you there? Can you take an interest in getting these things right?

The six-percent, the one-percent ...

A new study released last week by Lexington’s Alltech, which brews Kentucky Ale beers, and the Brewers Journal shows that of the 19,000-and-change breweries across the blue-green orb we call Earth, 94 percent of them are making “craft” beer.


Concurrently, I heard local food writer Steve Coomes remark that the nationwide percentage of chain restaurant versus independent restaurant preference holds at around 70-30. I'm sure "craft" beer hasn't yet reached 30%. Apparently lots of you like multinationals and chains.

A current topic in "craft" beer is diversity, and whether having taps that constantly rotate IPAs of various hues can be characterized as diverse. I don't believe it is, and according to Stan, I need to visit St. Louis.

I'm for it, by the way -- diversity and road trips.

Yesterday Jeff Alworth filed a dispatch from Bend, Oregon, headlined “American Palates: 82% IPA.” He reported a definite lack of diversity at the brewery taprooms he visited, leading him to write, “The point of all this? Hoppy ales have taken over American brewing, and we’re never going back.” And, “When a country develops its own beer culture, diversity declines.”

Perhaps this means Oregon is more advanced than we are here in the Midwest, because we have not yet developed a similar beer monoculture.


Speaking of diversity, the Brewers of Indiana Guild board is changing.


Brewers Guild Adds to Board, by Andy Ober (Inside Indiana Business)

The Brewers of Indiana Guild has elected five new members to its board of directors. The guild announced the additions over the weekend at the 3rd Annual Indiana Craft Brewers Conference in Indianapolis.

The new members are:

Those who have chosen to leave the board are:

The conference took place over the weekend at the Indianapolis Marriott East.


These comings and goings may seem like small beer to the uninitiated, but if Indiana beer were a sport, you'd see the four departing board members as hall of famers. They've stepped aside to make way for new blood, and this is key to invigorating any board of directors, not just BIG's. I congratulate Jeff, Ted, Clay and Blaine for their service and their selflessness.

Finally, on the topic of epochal beer presences, there has been a long overdue tribute to Rita.

You’ve seen her around, I know you have. And if you didn’t know who she was, you probably wondered what someone who looks like your cute little grandmother is doing at a beer festival.


I love the lady and laud this write-up.

THE BEER BEAT: I've decided to skip this year's Session Beer Day observance. See you in 2018.