The proper word for the alt-right is puke, not punk. 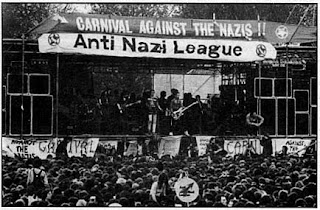 Of course the alt-right steals ideas. That's what you do when you have none of your own.

First, the alt-right stole Pepe the frog from cartoonist Matt Furie. Then, they stole enjoying milk from the calcium-deficient. Now, they’re trying to steal punk. Members of the alt-right have of late made the argument that “conservatism is the new punk” and that gadflies like Alex Jones and Milo Yiannopoulos are the modern day truth-telling equivalents of the Sex Pistols and the Clash, pushing back against social justice warriors and political correctness culture. In their eyes, their old, retrograde ideas—which inevitably manifest as fear and outrage at attempts to curb white male privilege—have suddenly become avant-garde because of…safe spaces or something.

Since it’s impossible to physically punch this loathsome idea in the face, Playboy reached out to some of our favorite young punks and some members of the old guard to talk about what punk really means. Many of our contributors pointed out that even though as a cultural movement it has always had its flaws and problems with representations, punk is still a place where people threatened by the right’s crusade can find strength, safety and community.

I think that this is exactly why it is nonsense when the alt-right strings together vapid words to try and incite a playground fight with those of us who put blood, sweat and tears into creating an expression that is the antithesis of everything that these alt-right meatheads represent. They are simply a distraction to the women, femmes, queers and people of color filling the columns of Spin, Rolling Stone, Pitchfork, the New York Times and numerous other publications that report on culture. I don’t see actual alt-right bands headlining Coachella, I see Beyoncé and Kendrick Lamar—two of the most punk in terms of crystallizing dissent about the status quo —artists taking the stage. Real punk is and will always be a total threat to the alt-right and their culture, which is based on white supremacy. Otherwise it isn’t real punk. The alt-right’s tactics are FAKE PUNK. The alt-white (I mean right) want us to sip tea, but we are drinking fresh water from a firehose.