Vision Zero (not applicable in Nawbany): "Why San Francisco Is Putting Pedestrians First on Its Main Thoroughfare." 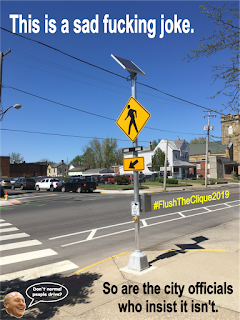 Gahan, Rosenbarger set to go full frontal Pinocchio about their urbanism credentials when the Congress for the New Urbanism 27 meets in Louisville June 11-15.


Car-centrism is the last socially acceptable form of imperialism in America. Debate among yourselves ... and thanks, B.

Why San Francisco Is Putting Pedestrians First on Its Main Thoroughfare, by Supriya Sridhar (Politico Magazine)

San Francisco plans to shut out cars on one of its major streets.

Legend has it that the young civil engineer who laid down the route for San Francisco’s Market Street in the 1800s so enraged people with the street’s unusual width that a mob chased him out of town. More than a century later, Market Street is one of the city’s key arteries, a wide boulevard on which the city’s historic streetcars jostle with buses, taxicabs, private passenger cars, Uber and Lyft rides, delivery vehicles and thousands of people biking every day. During peak hours, there are 100 buses running in either direction.

But Market Street is also the center of something traffic officials somewhat ominously refer to as the “High-Injury Network,” a collection of about 13 percent of the city’s streets that accounts for three-quarters of the serious and fatal traffic injuries. From January through April, 11 people have died in the area.

Next year, the car traffic that has made Market Street so clogged for decades—and also hazardous—should be gone.

Cities have been wrestling with what to do about traffic since the moment cars first careened onto the scene. And pedestrians often paid the price as planners devised street systems that made it easier for more and more cars to get around and shunted the people to the margins. Reversing this trend at a moment when younger, less car-dependent workers are flocking to cities has been a challenge. Other cities around the country have experimented with pedestrian-first planning. The Lincoln Road Mall in Miami Beach has existed since 1960, for example; and while it’s popular, it’s just eight blocks long. Boston pedestrianized short stretches of two downtown streets years ago, and Charlotte, N.C., is implementing a comprehensive downtown plan that will turn regular streets in pedestrian-only zones on the weekend. San Francisco’s Market Street makeover, though, is far more ambitious.

It was proposed nine years ago — “Unfortunately, San Francisco has a history of these kinds of big projects taking an incredibly long time to come to fruition,” said Wiedenmeier, who has been working on this for the past decade — and things picked up speed in 2014, when the city embraced an initiative called "Vision Zero," aimed at eliminating car-related fatalities by 2024. In 2015, the city established turn restrictions on Market Street, dissuading cars from using the thoroughfare.

Better Market Street is scheduled to break ground in the summer of 2020. The project still has some final administrative hurdles to overcome, making some supporters impatient. Earlier this month, nearly 100 protesters showed up on Market Street to support the initiative. Wearing bright-yellow T-shirts with bicycles , they demanded speeding up the project’s approval process.

“There is a desire from, I think, everyone to start construction as soon as possible,” Cristina Olea, project manager for Better Market Street, said. “We want a safer street. We want to reduce crashes. We also want people to feel comfortable walking or biking along Market Street.”