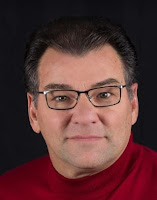 If memory serves, the state of Indiana does not demand medical qualifications to serve as coroner. The job is primarily administrative in nature. Congratulations to Steve Burks for winning the caucus; if Steve is reading, perhaps once he's settled into the position we can chat more about what a coroner does and I'll explain it here.

Please click through, read the piece and have a look at what The Aggregate is doing.

The Floyd County Republican Party held a caucus to fill the vacant position on Monday, May 20th. The position was vacated due to the death of Coroner David Moore in late April. Moore was elected Coroner in 2016, but prior to that he had served in the Marine Reserves, as a police officer in Summit County, and as Chaplain to the Greenville Township Volunteer Fire Department ...

... On the first ballot, a majority was reached. With 17 votes, Steve Burks was elected Coroner. Burks served on the Floyd County Council and as the New Albany Township Trustee prior to his election. After being announced the winner, Burks had this to say “I am ready to get in office and work with everyone who is already there. I am focused on serving the people. That’s the biggest thing.”