ON THE AVENUES: "Pints&union, where the classic beer hits keep right on pouring." 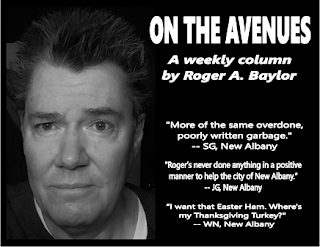 I began writing a column about beer for Food & Dining Magazine in 2005, give or take a year. Occasionally the magazine's main man John White finds a slot for a non-beer-centric restaurant profile, and those are fun to write, too. I'll always remain appreciative to John for giving me this opportunity to write and be read.

Food & Dining Magazine is a quarterly, and when a new issue arrives it has become my habit to glance back at the previous one and reprise my contribution in full for NA Confidential readers.

The summer issue for 2019 is due in a week or two, with my next column to address the way that the business of craft beer has become business; it always was, but now more than ever there's little margin for error for mom and pop brewing shops.

For the spring issue John kindly allowed me to do something rare for me at Food & Dining Magazine, this being to write about myself and the idea for the beer program at Pints&union. It turned out really well, and Andy Hyslop's photos are especially memorable. 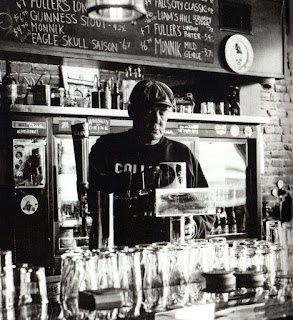 Pints&union, where the classic beer hits keep right on pouring.

Did you hear the one about two buddies walking into a coffee shop to talk about building a brand new “old” bar?

One of them was Joe Phillips, and the other was me. We began philosophizing about life, adult beverages, curry and third spaces. This chat was the impetus for Pints&union, a pub in downtown New Albany that opened in August of 2018.

On that fateful morning at Quills, we drained a few bracing espressos and got wired – then excited. We’d both been planning an honest, traditional, no-gimmicks public house where everybody knows your name, and it seemed like a good idea to work together toward this shared goal.

Now Joe is the owner of Pints&union, and I work for him as manager of a purposefully archaic beer program, which I’ll get to in a moment. First, meet Joe Phillips and his dream pub.

Joe is a food and drink industry lifer who began washing dishes at a pizzeria in California while still attending high school. He’s since compiled a resume that touches just about every base in the local food and drink business: Copper & Kings, Capriole Farms Goat Cheese, Butchertown Social and New Albanian Brewing Company’s Bank Street Brewhouse among others.

Pints&union is about “getting back to what really matters,” as Joe often puts it. The pub’s name has an ampersand but no spacing, representing an inclusive, sharing ethos; historically pubs have functioned as more than just watering holes. They’re living rooms, libraries, meeting halls and community centers.

Housed in a two-story wood-frame structure from the 1880s, Pints&union was rebuilt to its original 19th-century dimensions by Resch Construction. As many surviving materials as possible were reused during the course of the modernization.

The eclectic interior suggests a cross between an Irish pub and an American saloon, and this is fitting given the long record of taverns and eateries occupying the space. In 1890 when Nicholas Sauer’s saloon was the tenant, there were 80 drinking emporiums in New Albany (then populated by 21,000) — most located downtown within walking distance of each other.

Early results have been encouraging for Joe’s new-meets-old mix of stylistic influences at Pints&union, and -- speaking personally as a burned-out former brewery owner who was unsure he even had a place in today’s beer world -- I’m grateful to Joe for the chance to offer a slate of beers that largely eschews the avant-garde. To explain this, we must steal a quick glance through the rearview mirror.

I began working part-time in a downtown New Albany liquor store in 1983 with a copy of Michael Jackson’s seminal “World Guide to Beer” in my hands and a dawning recognition that all my interests coincided in the brewhouse: history, geography and intoxication among them.

Few dining and drinking establishments in metropolitan Louisville offered beer lists. To ask for a beer list was to be surveyed with dumbfounded amazement as though you were speaking in Estonian or wearing a conehead prosthesis. Bartenders bothering to reply at all would shrug.

“We have both kinds of beer, pal: Miller High Life and Miller Lite.”

In 1992, a poster called "Brewpubs and Craft Breweries" showed a map of breweries operating in the United States – all 300 or so of them. There existed precisely one brewery each in Kentucky (Oldenberg in Ft. Mitchell), Indiana (Broad Ripple Brewpub, Indianapolis) and Tennessee (Nashville’s Bohannon's/Market Street).

As of early 2018, the brewery counts for these states were 52, 137 and 82, respectively. Combined, that’s almost as many as were brewing in the entire country in 1992, and the paradigm shift over 35 years is stunning.

Today, we’re approaching 7,000 craft breweries in America. If each one brewed six different beers yearly (a ridiculously conservative estimate), that’d be 42,000 beers available for sampling, and this doesn’t account for imported beers, which now comprise time-honored flagships from Affligem through Zwiec, as well as a recent flock of American-influenced craft beers (Brew Dog, Mikkeller, Struis and many more).

There’s naturally a looming catch to this dazzling cornucopia of choice, because establishments selling beer still have finite space and budgetary limitations. Even the most voluminous warehouse-sized package store or cavernous walk-in cooler at the multi-tap must make hard decisions about which beers to keep in stock.

Many on-premise restaurants, bars and pubs elect to constantly rotate their draft beer offerings. A customer making weekly visits to a bar with 15 tap handles might be exposed to 200 different draft beers during a single year.

Consequently, a beer enthusiast’s “What’s new?” culture has evolved, placing a premium on the next new release while ignoring the historical knowledge base that brought us to the present juncture of sheer proliferation.

My stand is clear, and the time for a “back to basics” movement is now.

I believe there exists a silent majority among American beer drinkers who find the kaleidoscopic tilt-whirl of short attention spans – this frenetic hamster wheel approach to beer appreciation – utterly bewildering.

These are beer lovers who genuinely seek to drink better beer but are overwhelmed by ever-changing blackboards at their chosen pubs. They’re hesitant to ask questions for fear of geeks on both sides of the bar laughing at them. They don’t use the Untappd app, but they know exactly where your selfie stick belongs.

My solution at Pints&union is to go back to school -- the old school. We emphasize comfort beers, teach neglected styles, and offer the greatest beer hits of the 1300s through the 1900s placed alongside a few contemporary selections destined to become classics.

Pints&union reserves the right to reinvent today’s beer by boarding the way-back machine and starting all over. Find a beer you like, and have another. For me, proving this point is sweet, but savoring a warming Old Engine Oil on a cool evening is always better.

End note: The preceding was edited to update the identity of our chef. Dalton Gahafer replaced Aaron Tuttle in early May.

May 6: ON THE AVENUES REWOUND: Ghosts within these stones, defiance in these bones (2018).

May 5: ON THE AVENUES REWOUND: Our great and noble leader soon will be going away, so let's break out the țuică and make a joyful noise.

May 3: ON THE AVENUES HORSE RACE REHASH: Sadly, the Kentucky Derby no longer is decadent and depraved. It’s just another vacuous capitalist bait ‘n’ switch.
Posted by The New Albanian at 5/21/2019 12:24:00 PM