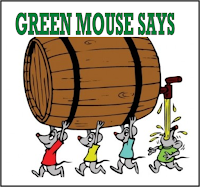 Here's something to take with you into your polling place. Originally published on December 16, 2017.

The Mouse pieced this one together from bits and pieces offered by multiple sources with ties to the New Albany Fire Department.

At 11:00 p.m. on a recent evening, four firefighters (Engine 3) were awakened and sent to the vicinity of the YMCA, where Mayor Jeff Gahan already was on the scene, taking control of the situation.

Gahan promptly asked the firefighters to change a flat tire on a vehicle owned by friends of his.

Their sleep interrupted, and unavailable for any genuine emergency, the four firefighters tried to do as they were asked -- no, please, let's be completely honest: as they were told by the city's resident megalomaniac -- but it wasn't possible because there was something wrong with the spare.

Only then was a wrecker called. Meanwhile, police chief Todd Bailey had arrived; when the car was towed, Bailey transported the mayor's friends to their homes in Jeffersonville.

Now this is service; one's own 24-hour firefighter troubleshooting agency with a police escort -- and what can any of these firefighters even say about it for fear of retaliation?

Who were these VIP friends of Gahan's, anyway?

There's more. The Green Mouse also was told about another instance of Gahan's legendary nepotistic proclivities.

The practice among those with power or influence of favoring relatives or friends, especially by giving them jobs.

It seems that a relative of Dear Leader's recently was hired by the fire department following pressure from the mayor, but has proven to be unequal to the physical requirements of the job; after being written up numerous times, he's been removed from basic duties as a firefighter and placed on probation, awaiting a desk job.

Maybe that's how Gahan keeps peace in the family, at the expense of discord in the department.

Has he no shame?

Sadly, there's more gossip standing by the fire hydrant. The Mouse will get to these budgetary matters in due time. 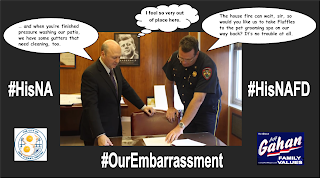 NA Confidential supports David White for Mayor in the Democratic Party primary, with voting now through May 7.
Posted by The New Albanian at 5/03/2019 05:47:00 PM