I'd rather read Elton John's autobiography than watch the biopic. 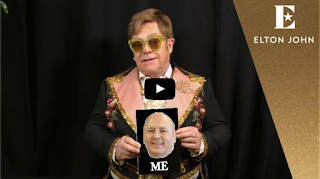 To repeat, in my world musical biopics are bunk.

Give me a gifted documentarian, archival footage and original songs and I'm in. Having said this, the reviews I've seen for Rocketman suggest it might be an exception.

But you see, here's the thing. Elton's autobiography is coming this fall, and if the following is any indication of his skill with the written word, I'd prefer reading the book. They're usually better than the film adaptation, anyway.

My chosen excerpt addresses the chance nature of Elton's acquaintance with Bernie Taupin. For 50 years the pianist has written music to Taupin's words, and the their catalog of songs is astounding. Without that, would we even be having this chat?

Elton John: 'They wanted to tone down the sex and drugs. But I haven’t led a PG-13 life', by Elton John (The Guardian)

In this exclusive article, Elton John writes about his extraordinary life and why he finally decided to give the Rocketman biopic the green light

... Jamie and Taron have even managed to capture my relationship with Bernie, which is frankly a miracle, because I really have no idea how that works. We were thrown together at random. I had failed an audition for Liberty Records in 1967, and a guy from the label gave me an envelope with his lyrics in it as an afterthought, like a consolation prize. I’m not sure he had even opened the envelope and read the lyrics himself before he did it: I think he just felt sorry for me and didn’t want me to go away empty handed.

We were very close right at the start of our career together, but we’re completely different people. He comes from the wilds of Lincolnshire, I come from the suburbs of London. He lives in Santa Barbara and he’s literally won competitions for roping cattle. I collect antique porcelain and the only way you’d get me on the back of a horse is at gunpoint. Neither of us can write if the other is in the room. But there’s a weird bond between us that I felt the minute I opened the envelope – I could just write music to his words straight away, without even thinking about it – and it’s lasted over 50 years.