Not me, but still: "Meet the blogger powering a cycle revolution." 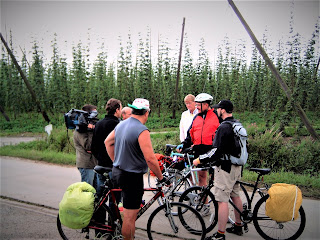 During the approximate 15-year period of 1998 through 2012, I was an avid bicyclist. The late Kevin Richards got me back into it (I hadn't biked since high school) and it was a blast.

Regional forays led to overseas excursions. Those trips to Europe we took were the best ever. Back home I tried hard to organize my life such that I could bike or walk to work.

Then, as the Bank Street Brewhouse expansion devolved into trench warfare, I had less time for my bicycle. There was burnout involved, too. I took up walking in 2013 and haven't been on a bike in at least three years.

As much as I rode there for a while, a part of me always resisted the competitive aspect of bicycling, which Kevin very much embraced. For instance, I always used middle-of-the-road hybrid tires, and as I grew more confident I tended to avoid the more egregious of the showy costumes whenever possible.

One time I went out with a group of bicycling club enthusiasts for a ride in Harrison County, and what I remember about it was their conversation for the better part of two hours about all the money they were spending on bigger and better equipment.

It was my last group ride. Me? Just a locally-oriented beercyclist, thanks.

It wasn't just a weekend thing for me. It was everyday. In 2010 my mileage log showed more than 3,000 miles, but no single trip exceeded 30. I enjoyed commuting by bike when possible, and saw it as an essential part of urban life even in a place like New Albany where the doltish ruling elites never once grasped the meaning of it (and still don't).

Because any city official who believes a sharrow symbol can be drawn on Vincennes Street and this somehow encourages the use of bicycles is a complete moron and hardly worth my precious time to insult him/them.

This article goes beyond my own ruminations, and yet there's a big element of it to which I can well relate. The whole point of a bicycle is democratic. It's a freedom kind of thing. It's well past time for me to get back in the saddle, albeit it with modest and sustainable aims. Abysmal time-servers in government and oblivious drivers behind steering wheels both aside, bikes are a tool in the urban arsenal.

I need to reclaim mine.

Meet the blogger powering a cycle revolution, by Robyn Wilder (The Guardian)

Dump the Lycra and competitive attitude. Cycling is open to all. Activist Jools Walker reveals why life is better by bike – and why she’s fighting to make it more socially inclusive

I’m sitting in the dark eating biscuits with Jools Walker while she tells me about elitism in cycling. It’s not quite what I was expecting from an interview with an icon in the cycling community, but the rain has forced us inside. Five minutes ago Walker was gliding through the park on her Pashley Princess against a curtain of falling blossom. Now the rain is lashing the windows as we sit on her sofa, with the rain-spotted bicycle propped against an armchair, looking slightly resentful.

“The way cycling is portrayed sometimes…” Walker tells me, reaching for another biscuit from the super-sized tin her mother has supplied. “It can feel like you have to have the latest gear or the latest bike, or whatever, to take part. The other day I heard someone refer to it as ‘the new golf’. No offence to any golfers, of course,” she adds. “But cycling doesn’t have to be this hyped, expensive, middle-class, aspirational thing. There’s the Lycra that you’re supposed to squeeze yourself into, the diet regimes to make you the fittest and the best, and get thighs the size of a lamb. It’s just like… No! That isn’t it. It’s part of the narrative, but it’s not the whole story.”

Walker, it should be noted, does not have thighs the size of a lamb. Sure, she cuts a glamorous figure in her paper-bag trousers and statement necklace – and her blog, VéloCityGirl, was originally devoted to cycling and fashion. However, it’s her candid, humorous takes on mental health, the female cycling experience and the industry challenges for women of colour that have made her such a prominent presence.

Now she’s written a funny, vibrant book, Back in the Frame: How To Get Back on Your Bike, Whatever Life Throws at You, which details how cycling has helped (and hindered) her own wellbeing – in particular her diagnosis of depression, and the stroke she suffered in her 30s. It’s also an instructional manual for any budding female cyclists who, like her, aren’t seeing anyone in the industry they relate to – whether that’s other women, women of colour, or just the fact that they’re 28 and might feel they’re past it ...