"Biden is the biggest threat to a progressive presidential nominee and #MeToo-ing him won’t keep him out of the White House." 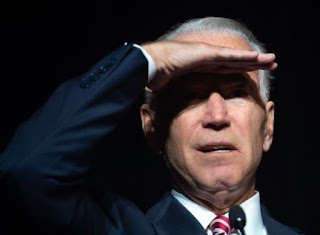 ... Now it seems, That Guy is widely viewed as the best and safest candidate to get us out of this perilous and scary political period. But the irony is that so much of what is terrifying and dangerous about this time — the Trump administration, the ever more aggressive erosion of voting and reproductive rights, the crisis in criminal justice and yawning economic chasm between the rich and everyone else — are in fact problems that can in part be laid at the feet of Joe Biden himself, and the guys we’ve regularly been assured are Democrats’ only answer ...


I'll be cutting straight to the chase on this one, although you're encouraged to click through and read the entire essay.

You know, all those realities behind the bright, shiny objects.

Joe Biden and the limits of #MeToo in campaign politics

... If leftists want someone to the left of Biden in the White House, they have to stop relying on dead-end culture war tactics that only appeal to a small minority of middle-class liberal voters. Joe Biden could win, and we have to be honest about the fact that he has a lot going for him. The nostalgic halo of the Obama years appeals to the people who just want things to go back to “normal,” which maybe wasn’t great, but didn’t appear to be mired in instability and weekly crises. For the vast majority of women, his 1994 Violence Against Women Act wasn’t a short-sighted and overly punitive contribution to the prison industrial complex, but a defense of women against domestic abuse. It enjoyed massive bipartisan support, particularly from women and feminist groups, who often see prison and policing as the only solutions to male-on-female violence. More importantly though, people like Joe Biden—women like Joe Biden—and that is because he is very likeable.

This isn’t even entirely a generational gap. A lot of younger liberals like him as well. To this day, progressive comedy stalwarts The Onion appear to find him adorable, despite his “kids these days” attitude towards the financial struggles of young people. But here’s what voters likely won’t find adorable:


These are the talking points that working-class voters will respond to. Joseph Robinette Biden, Jr. is just another blue-blooded, dynastic elite with a career full of cruel and idiotic politics and a record of favoring the ultra-wealthy and punishing the poor. Rather than emphasizing the fact that a seventy-six-year-old man from Scranton, Pennsylvania doesn’t have the same physical boundaries as professional managerial-class millennials in New York and D.C., leftists should take a break from the feminist culture wars and go after his voting record. Biden is the biggest threat to a progressive presidential nominee and #MeToo-ing him won’t keep him out of the White House. If you don’t believe me, just look who’s in it now.