Rick Stidham and Akasha Brewing Company for New Albany Beer Week at Pints&union on Tuesday, May 28.

The first of two Pints&union gatherings for New Albany Beer Week comes on Tuesday, May 28 when owner/brewer Rick Stidham joins us along with a keg of Otterburn English Brown (for sale by the pint and half-pint) and a few other beer samples.

I've known Rick for a very long time and can't even remember when we first met. He brews wonderful beer and Akasha glides along under the radar. I think it's a criminally underrated brewery. Thanks both to Rick and his Indiana wholesaler, Starlight Distribution.

My profile of Akasha was published in Food & Dining Magazine in November of 2017, and the text appeared here in March of 2018. 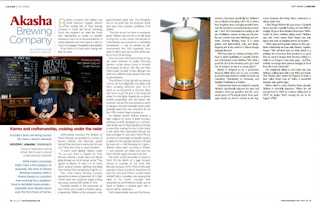 When the latest issue of Food & Dining Magazine comes out ...

LIVE TO EAT: Read my stories about Chef Space and Tito's Handmade Vodka, and grab the latest issue of Food & Dining Magazine, out now.

... I go back to the previous edition and reprise my contributions. In this instance, it's Winter 2017 (Vol. 58; Nov-Dec-Jan), and profiles of Akasha Brewing Company and Waylon's Feed & Firewater; the latter will appear elsewhere.

As today’s beers are being poured, let’s learn a word in Sanskrit.

AKASHA … a·ka·sha (Hinduism)(Noun) A supposed universal etheric field in which a record of past events is imprinted.

Especially since Akasha wasn’t even the first choice of names.

Brewery co-owners Rick Stidham and Gerald Nawrocki originally selected the working title of Muse Brewing Company. In Greek and Roman mythology, Zeus’s nine daughters are called the Muses, each representing an artistic or scientific endeavor. A muse can be the personification of artistic inspiration, and when used as a verb, “to muse” is to engage in thoughtful contemplation.

In fact, some of us have been musing over beers for years.

Unfortunately, nowadays the denizens of Mount Olympus are guarded by a cordon of lawyers. Stidham and Nawrocki quickly learned Muse had been trademarked for beer use. Calmly, they chose to switch identities.

“It wasn’t worth fighting,” Stidham recalls. “So, we went down to Against the Grain Brewery, ordered a couple beers and started going through our list of backup names.” They agreed on Akasha: “I’d seen it in an article about quantum physics, signifying ‘everything from nothing.’ That sounded about right to us.”

Currently assisted in the brewhouse by Kacy Machir, who doubles as Akasha’s graphics generator, Stidham is the company’s wryly good-humored public face. He’s thoughtful and on the quiet side, but possessing ample beer savvy and a resolute confidence in his abilities.

“The beer we put out there is consistently good,” Stidham says, and this is no idle boast coming from a man whose commitment to craftsmanship was nurtured as a methodical homebrewer, one so devoted to self-improvement that he’d repeatedly brew styles he didn’t even care to drink, all the better to hone his technique.

One of them is Gose (go-zah), an obscure German ale that delightfully exemplifies craft beer’s prevailing eclecticism, given that it’s about as unconventional as Germans allow their beers to get.

The grist is half barley, half wheat. It is only lightly hopped, low in alcohol content, purposefully tart, and spiced with coriander and salt. The style reached its zenith in Leipzig in the early twentieth century, then gradually lapsed into near extinction. By the late 1990s, revivals began popping up.

For Akasha’s version, Stidham achieves a slight tanginess by means of kettle souring, a technique recently developed as a comparatively simple way of imparting desired tartness to beer.

After mashing, the wort is flash boiled in the kettle, then recirculated through the heat exchanger to cool down. When the liquid returns to the kettle, lactobacillus bacteria is added for the requisite souring.

A bit later, the hops, salt -- Pink Himalayan, as “it gives a different, better taste,” according to Stidham -- and coriander are added, and when the boil is finished, regular ale yeast is pitched.

The other current best-seller at Akasha is Fehr’s XS, the rebirth of a lager formerly brewed in Louisville by the Frank Fehr Brewing Company (1872-1964). It’s the polar opposite of Gose.

In order to bring Fehr’s XS back from obscurity, Stidham worked closely with Jeff Faith, a Louisvillian who acquired the rights to the brand’s copyright. Faith researched its pre-Prohibition recipe, and he found in Stidham a kindred spirit with a shared zeal for authenticity.

Faith’s determination was such that he purchased a fermenter specifically for Stidham’s use at Akasha in brewing Fehr’s XS, so that a beer requiring slow, cool aging wouldn’t interrupt the brewery’s normal production schedule.

Fehr’s XS is formulated according to the pre-Prohibition custom of using six-row barley, rice, Cluster hops (for bittering) and aromatic German finishing hops. It is straw golden and light-bodied; crisp and firmly-hopped; and in the mold of a Pilsner, though uniquely flavored.

“We have plans to continue to bring Fehr's back to wider availability in Louisville and the rest of Kentucky,” notes Stidham. “We drink a good bit of it at the brewery, and I get a kick out of seeing it on tap at so many places.”

Akasha is designed to be a production brewery. While there are no cans or bottles at present, kegs travel to outside accounts via Dauntless Distributing in Kentucky and Starlight Distribution in Indiana.

However, beer lovers are invited to stop by Akasha’s dog-friendly taproom for pints and samplers, carry-out growlers and the occasional game of Monopoly. Apart from packaged snacks, no food is served at the taproom; however, this being NuLu, sustenance is always quite near.

“Rick’s right, and it speaks volumes to the symbiotic relationship we have with Akasha,” explains Rogers.

“We sell their beer on draft, which is a privilege for us because their product is so good that we want it despite their brewery selling it a dollar or so cheaper a few steps away – and they actively encourage their patrons bringing in food from the local restaurants.”